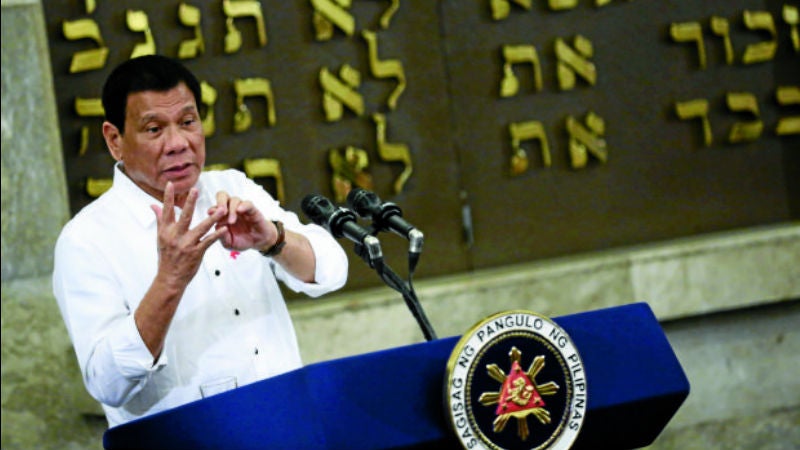 President Rodrigo Duterte gave himself a modest rating for his performance in his first 100 days in office, though three-quarters of Filipinos were satisfied with how he was doing despite coming under fire abroad for his deadly crackdown on suspected drug dealers and users.

“On a scale of 1-10, I give myself a 6,” the President said in a text message to the Inquirer. “To me it is a modest achievement. I’m not ambitious in scoring myself. I only deal with reality. Success to me is something else.”

Despite his self-rated “modest achievement,” his popularity soared during his first three months in office in an apparent endorsement by Filipinos of his brutal crackdown on crime.

Seventy-six percent of Filipinos polled by Social Weather Stations (SWS) on Sept. 24-27 said they were “satisfied” with Mr. Duterte’s performance, with just 11 percent reporting being “dissatisfied.” Thirteen percent were undecided.

SWS asked respondents about Mr. Duterte’s performance as President without reference to the drug war.

The survey, which covered 1,200 adults nationwide, had a margin of error of plus or minus 3 percentage points.

In Mindanao, where Mr. Duterte is from, respondents gave him the highest rating, with 88 percent satisfied and just 4 percent not satisfied.

“The President seems to be off to a very good start,” his spokesperson, Ernesto Abella, told reporters as he assessed the survey. “The people trust what he is doing.”

In a statement, Presidential Communications Secretary Martin Andanar said this was “not the time for complacency” as much work still needed to be done.

“More than ever, we ask for the full support of all Filipinos behind the President’s reform agenda so that we can achieve lasting peace and prosperity in the years ahead,” he also said.

Earl Parreño of the Institute for Political and Electoral Reform said the drug war resonated more with those aged 25 to 44 because this group was the “most economically productive and they feel threatened by the crimes happening in the country.”

People are applauding Mr. Duterte’s anticrime stance because most of them feel the negative impact of the illegal drug trade in the country, Parreño said.

He noted that even nondrug dependents were affected when one of their family members or friends was a drug user.

The President’s high ratings in the survey signaled a huge jump in support from the May election, which he won in what was considered a landslide but still with just 37.6 percent of the votes.

In the Philippines, the presidential election is decided simply by whoever gets the most votes, and his nearest rival secured 22.6 percent.

Mr. Duterte, a former mayor of Davao City, stormed to victory largely on his pledge to eradicate crime in six months.

He promised that tens of thousands of people would be killed in his crackdown on crime and that he would pardon himself and police if they were charged with mass murder.

Since taking office on June 30, Mr. Duterte has continued his threats and incitements to kill, while unleashing abusive tirades at his critics.

Last week, he said he would be “happy to slaughter” 3 million drug addicts, as he likened his war on drugs to Nazi leader Adolf Hitler’s extermination of  Jews.

Following an international outcry, he apologized to Jewish people for his Hitler reference but insisted he was “emphatic” in his desire to kill all drug addicts.

He has also said his crime war will continue for at least 12 months.

But the President has also said he is not breaking any laws, insisting that police are killing only in self-defense and many of the other deaths are a result of gang violence.

Mr. Duterte has unleashed a number of expletive-laced tirades against his critics, telling US President Barack Obama “you can go to hell” and saying he may eventually decide to “break up with America.” He has also lashed out at the European Union and the United Nations.   —WITH REPORTS FROM CHRISTINE O. AVENDAÑO; ANA ROA, INQUIRER RESEARCH; AFP /TVJ