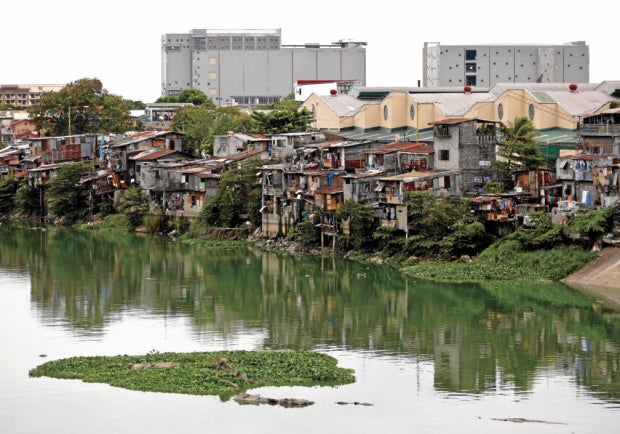 In this photo taken in April, makeshift houses line the Manggahan floodway in Pasig City. These houses become submerged in the water during the rainy season. LYN RILLON/INQUIRER

Apart from focusing on the drug war, President Rodrigo Duterte must also pay attention to other priorities, such as traffic, poverty, infrastructure and employment generation, according to analysts interviewed by the Inquirer.

“President Duterte will also have to pour more attention to other urgent problems such as the infrastructure bottlenecks, particularly the traffic woes in the major cities,” said Richard Heydarian, political science professor at De La Salle University, one of four social and political scientists and analysts interviewed by Inquirer Research and Inquirer Mindanao on their take on the President’s next 100 days.

“I expect the administration to slowly diversify its political agenda over the coming months, as issues such as poverty, infrastructure, tourism, investment sentiment and employment generation begin to demand more attention,” he added.

“[I] expect him to exert more consented effort to reach out to China and Russia in order to diversify Philippine foreign relations,” he added. “The disputes in the West Philippine Sea, however, could put constraints on how far he can pivot to China, but expecting some element of normalization in bilateral ties is not far-fetched, at least in the coming months.”

“Poverty is the real culprit,” said University of Santo Tomas political science professor Edmund Tayao. “Previous administrations have tried to have an impact on the poverty incidence, but it still remains. I hope apart from the drug war and the rehabilitation of the affected, there should also be rewarding livelihood for others previously involved in drug trade. This is a more holistic take on development.”

“I also hope the government pushes forth with charter change or constitutional reform, and going for a total overhaul instead of piece-meal changes,” he added.

“As citizens of a neocolony, we are emboldened by presidential pronouncements promising an independent foreign policy. But carving out bigger and more independent spaces for us internationally requires well-thought-out and deliberate moves and speech rather than impulsiveness and political brinkmanship,” said Mags Maglana, development management consultant who also writes a column for a Davao daily.

“The President should send strong unequivocal signals to his communications team and a few of his front line people to shift from divisive campaigning to more inclusive governance,” Maglana added.

For Ateneo de Manila University’s Carmel Abao, other priorities should include peace with the Left, federalism, antimining efforts, ending contractualization and foreign policy.

Abao lauded the government’s antimining efforts thus far. “The Department of Environment and Natural Resources has been calling the attention of several mining companies regarding compliance,” she said.

“Anticontractualization is a good agenda but the proposal of a win-win situation where regularization is to take place at the level of the contracting agency should be rejected. This will lead to the legalization and institutionalization of labor-only contracting. The Duterte government should first try enforcing compliance of existing labor laws (which prohibits ‘endo’ and labor-only contracting) and enacting a security of tenure law,” Abao added.

As for foreign policy, Abao said that the President must go “beyond rhetoric” when it comes to the United States. “It is good that he is presenting a critical stance against the US but he has to go beyond the rhetoric regarding the US historical crimes as our colonizers and look to the here and now,” she said.