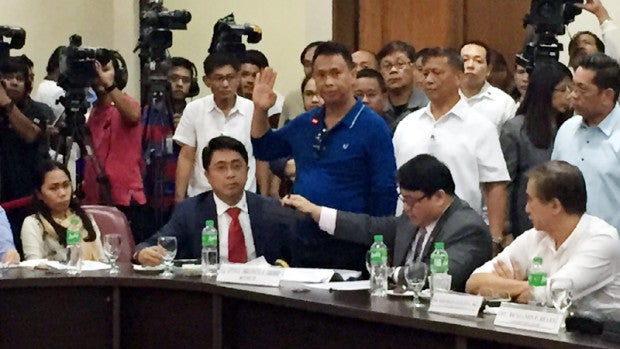 During the  third day of the House of Representatives justice committee inquiry into the alleged proliferation of drugs at the Bilibid, ex-police officer Engelberto Durano tagged De Lima’s former driver Ronnie Dayan as offering protection to the drug business of Diaz inside the Bilibid.

Diaz, regarded as the No. 1 drug lord of Central Visayas, was killed by policemen in a shootout in Las Piñas City last June 17.

In February 2014, Diaz called him up and ordered him to coordinate with Dayan’s business associate Joenel Pederio, who allegedly owned a shabu market in Zamboanga Del Norte.

Sometime in November and December 2014, Durano said Diaz again called him up and asked him to prepare P1.5 million.

Diaz told Durano to secure the money inside shoe boxes and wrap it in gift wrapper, and then have these delivered to then Secretary De Lima.

Durano said he proceeded to the Bilibid TV Channeln 3 (BTV-3) office that served as the office of Jaybee Sebastian, the alleged drug trader of De Lima to raise campaign funds from inside the Bilibid.

Durano said he was escorted inside the BTV-3 room where he saw De Lima and Sebastian waiting for him.

Durano said he handed over the boxes of money to De Lima.

(When we were approaching the secretary, I noticed that De Lima was looking at us. When I entered the BTV-3 office, I saw Jaybee Sebastian and Hans Tan.)

(I gave De Lima the box containing P1.5 million and said, “Ma’am, this is it.” Secretary De Lima took it and gave it to the man who met with me.)

Durano said after leaving, he looked back and saw De Lima posing nearby a pole and posing seductively to Sebastian.

(As I was walking away, I looked back at Secretary De Lima and saw that she was walking like a model towards the metal pole in the middle of the BTV-3, then she held the pole and her scarf and said, “Is this okay, Jaybee?” as one hand was raised and the other was lowered.)

Durano quipped that he was not pleased with what he saw, describing De Lima as looking more like a dance instructor seducing Sebastian.

Durano apparently was referring to a derogatory term “tiguwang igat,” which is Bisaya for “malanding matanda (flirtatious old person).”

He also alleged Kerwin Espinosa, the son of Albuera mayor Rolando Espinosa who was recently arrested on drug charges, transacted with Diaz who traded as much as 50 kilos shabu per month to Kerwin from inside the Bilibid.

Kerwin is said to be the top drug lord in Eastern Visayas. He is at large. JE/rga