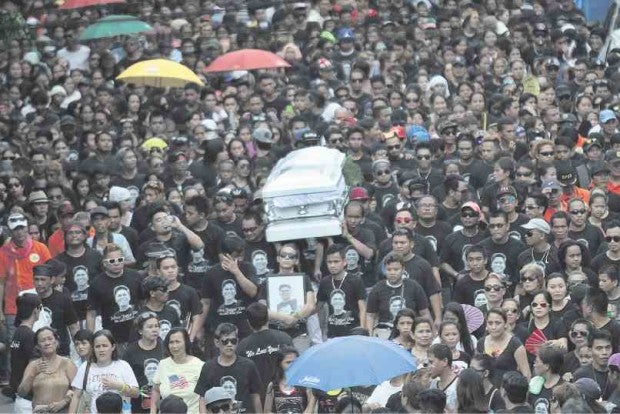 CEBU CITY—They wore black T-shirts printed in front with the photo of the deceased and the words: “Jeffrey ‘Jaguar’ Diaz, We Will Miss You.”

On Monday, at least 2,500 people joined the funeral procession here for Diaz, No. 1 drug lord of Central Visayas who was killed by policemen in a reported shootout in Las Piñas City, on June 17. Half a kilo of shabu or methamphetamine hydrochloride was seized from him.

A week before, Diaz had sent surrender feelers and claimed that he was a changed man.

“Someone will definitely succeed Jaguar. But we will also get him,” said Chief Supt. Patrocinio Comendador Jr., regional police director.

The hourlong procession caused a traffic gridlock when it reached V. Rama Avenue in Barangay Calamba as Diaz’s supporters, some riding on motorcycles, occupied the entire right lane. Tartanillas (horse-drawn carriages) were adorned with white balloons.

“Condolence to Manoy Jaguar! We love you!” read a brown carton raised by one of the Calamba residents.

Susan Chiong, 41, a street sweeper, said many people considered Diaz a hero. “He was a kind man. He gave us Christmas presents. We received at least 5 kilos of rice from him every time we visited his house,” Chiong said.

A Mass was held at the Archdiocesan Shrine of San Nicolas de Tolentino, where Diaz, then 10, reportedly served as an altar boy in 1970.

Senior Supt. Benjamin Santos Jr., city police chief, downplayed perceptions that those who joined the funeral were sympathizers who looked up to Diaz as their idol.

“We received reports that those who joined Jaguar’s funeral received between P500 and P800 each. They went there for the money, not to sympathize,” Santos told the Inquirer. Those who carried the coffin were reportedly given P1,000 each.

“Of course, life is difficult. It’s not easy to earn money. So people really went there because they were paid,” Santos said.

Comendador said Diaz would likely be replaced by someone from his clan.

“We have gained the upper hand. Let us not waste the momentum, and instead create a smaller world for them (drug peddlers),” he said.