De Lima storms out of Senate probe into killings 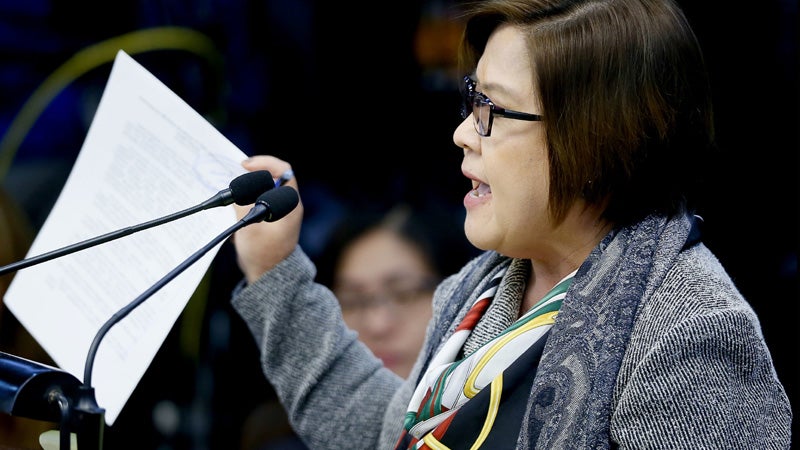 Opposition Senator Leila De Lima holds some documents as she questions witnesses at the resumption of the Philippine Senate probe on extrajudicial killings in the continuing “war on drugs” campaign of President Rodrigo Duterte Monday, Oct. 3, 2016 in suburban Pasay city, south of Manila, Philippines. The Philippine Senate’s Committee on Justice and Human Rights, has invited witnesses to look into the possible human rights violations and extrajudicial killings in Davao city when Duterte was still the city mayor as well as the current “war on drugs” campaign by the present administration. (AP Photo/Bullit Marquez)

Tension went high when senators Richard Gordon, Senate Committee on Justice and Human Rights chair, and Panfilo Lacson questioned De Lima why witness Edgar Matobato left the chamber without the panel’s permission. Gordon also castigated the lady senator for alleged “concealment” of information that Matobato has been charged with kidnapping with ransom in 2000 by the National Bureau of Investigation.

But De Lima and Antonio Trillanes IV stood up to say that Matobato informed the Senate about his kidnapping case in one of the panel’s earlier hearings.

Still, Gordon maintained that De Lima concealed vital information about Matobato, prompting the lady senator to walk out of the Senate, fuming: “It pains me to be accused of material concealment. I am walking out, I’m sorry.”