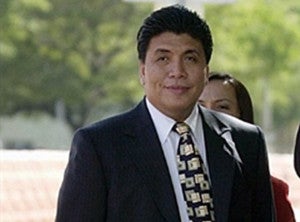 SURIGAO CITY – Eco-activists here have threatened to sue officials of the Mines and Geosciences Bureau once they allow anew a suspended nickel mine to resume shipping millions worth of ore overseas.

“While the environment department is busy suspending erring mining companies in the country, it apparently continues to allow a suspended mine in Surigao del Norte to make profits out of Mother Nature’s misery,” said Edgar Canda, provincial coordinator of the group Bayan Muna.

Canda, whose group was part of the pro-environment coalition called Caraga Watch, was reacting to the tentative approval by the Department of Environment and Natural Resources (DENR) to allow the Claver Mineral Development Corp. (CMDC) to sell two more shiploads of nickel ore to China.

The suspended mining company was granted permits to sell three shiploads of ore to China in June but it only managed to sell one shipload after Environment Secretary Gina Lopez halted the other shipments following the agency’s nationwide audit of large-scale mining companies.

The approval to proceed with the two other shipments was confirmed to the Philippine Daily Inquirer by Danel Bilderol, MBG Caraga officer-in-charge, who pointed to Environment Undersecretary Leo Jasareno as the one who gave the “verbal order.”

“Undersecretary Jasareno instructed us to issue the two OTPs (ore transport permits),” Bilderol said. He added that the instruction was made in the presence of Pichay at the sidelines of the hearing for the proposed 2017 budget of the DENR at the House of Representatives on September 5.

Bilderol said Jasareno, Lopez and other high-ranking MGB and DENR officials were present in the budget briefing for the agency’s P9-billion budget for next year.

Three days before the DENR budget hearing, Pichay called Lopez “crazy” for supposedly wanting to close down all mining firms in the country.

However, Bilderol clarified that MGB-Caraga had not yet formally released the permits because they were still waiting for Jasareno’s “written memorandum.”

Bilderol disclosed that when they tried to obtain written approval from MGB Director Mario Luis Jacinto, the official declined ro release an approval and told them to get the permits from Jasareno instead.

CMDC was suspended in 2012 for environmental violations but has managed to sell shiploads of ore for “environmental” reasons. 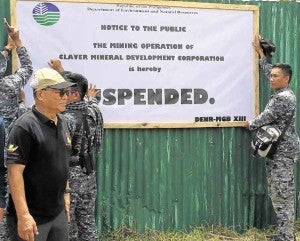 DENR officials post a notice of suspension of operations on the gates of Claver Mineral Development Corp., a company owned by Rep. Prospero Pichay. While the operations have been suspended, Pichay’s company was allowed to transport and sell P12 million worth of ore. DANILO ADORADOR/INQUIRER MINDANAO

Months after suspending CMDC in 2012, then MGB director Jasareno allowed CMDC to sell four shiploads of low-grade ore supposedly obtained from the “wastes” generated from the company’s rehabilitation activities.

In June, days before President Rodrigo Duterte – who has vowed to get tough on big miners – was sworn into office, Jasareno again granted CMDC three transport and export permits for “environmental” reasons, prompting eco-activists to ask whether the controversial mining company had an endless supply of wastes.

CMDC earned P174 million from the four shipments in 2012, while the shipload that the company managed to sell in June this year turned in over P20 million, records from MGB-Caraga show.

“In 2012 they (MGB) said the wastes needed to be shipped out because of environmental risks. Four years later, they still have the same alibi, so we’re really wondering if this company has unlimited supply of wastes,” said Rev. Pio Mercado, Caraga Watch spokesperson.

Mercado and Canda said Caraga Watch has been considering the filing of corruption cases against MGB and DENR officials before the Ombudsman if more transport and export permits were granted to CMDC.

“We are disappointed that despite President Duterte’s marching orders against irresponsible mining and corruption, there are still elements within MGB and DENR who don’t get the message,” Canda said.

The group also called on Lopez to review the rehabilitation activities of CMDC and ascertain its ownership before granting it any permit. They noted that the latest set of owners, led by Pichay, is only one of the three factions within CMDC claiming ownership of the company.  SFM