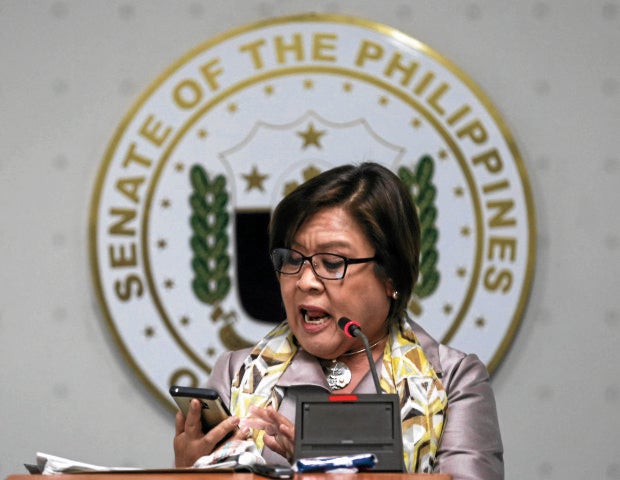 There are at least two congressmen in the House of Representatives who watched the alleged sex scandal of Senator Leila De Lima, cautioning against showing the video in the congressional inquiry into the alleged Bilibid drug trade.

In a press briefing of the minority bloc on Wednesday, Buhay Rep. Lito Atienza and Minority Floor Leader Quezon Rep. Danny Suarez admitted to watching the alleged sex videos and offered no compliments to the alleged main performer De Lima.

“Tama yung reaksyon ni Pangulong Duterte. Pag nakikita ko yun, nawawalan ako ng gana (President Duterte’s reaction is right. When I see the vide, I lose my appetite),” he added, referring to the reaction of President Rodrigo Duterte on the alleged video of her staunchest critic.

Amid the ruckus of laughter from the audience, Atienza interjected that the performers in the video were ugly.

For his part, Suarez denied when asked by a female reporter if publicly showing and laughing at the alleged sex tape equate to slut-shaming and a form of phallic dominance.

Phallic dominance pertains to a form of dominance over the other gender by virtue of the possession of a penis.

“Of course not! Miss, this happened already. Tapos na ito, na-unearth na ito before (This has been done and unearthed before),” Suarez told the female reporter who cried foul over phallic domination.

Suarez then took the opportunity of praising the male performer in the alleged video.

The minority bloc maintained that it opposed the suggestion of Speaker Pantaleon Alvarez to show the video in the Bilibid inquiry in a bid to establish that De Lima had a relationship with her former driver Ronnie Dayan, her alleged bagman in the Bilibid drug trade.

But he followed that in jest with a caveat that the video may be shown if it had better-looking performers.

“Kung maganda sa mata, okay. Kung hindi, eh huwag na ipakita (If the performers were good-looking, it would be all right. Otherwise, let’s not show it),” Suarez said. RAM