The PNP Criminal Investigation and Detection Group (CIDG) said it arrested Isa from a house in Barangay West Crame in San Juan City, a stone’s throw away from the PNP headquarters in Camp Crame.

The CIDG said Isa, who ran for Sulu vice governor in May’s elections but lost, was arrested with three others last Saturday.

CIDG director Chief Supt. Roel Obusan said Isa, of Indanan, Sulu, was tight-lipped during interrogation about the source of the firearms.

But Dela Rosa said, “We will not stop until there’s no stone left unturned.”

The operation stemmed from a tip the CIDG received in July that Isa and a certain “Wahid” were supplying guns to Abu Sayyaf bandits and war lords in the Autonomous Region in Muslim Mindanao. The weapons were reportedly delivered from Manila to Zamboanga, then to Jolo, Sulu, loaded on sports utility vehicles ferried on roll-on roll-off ferries.

In August, Isa, Wahid and unidentified ASG members reportedly went to Manila to buy a cache of M203 grenade launchers and M14 rifles, explosives components, and thousands of ammunition. They were reportedly sent by an unidentified Abu Sayyaf commander.  CBB 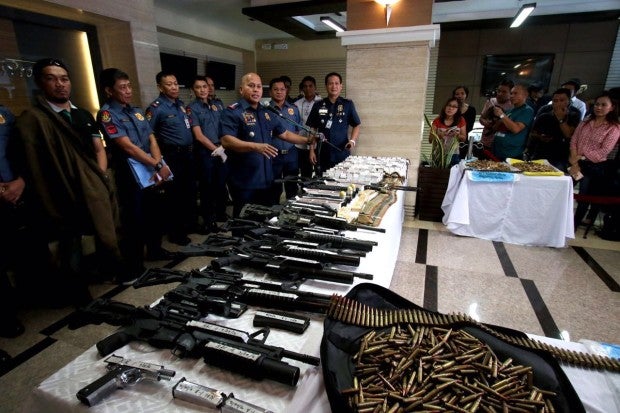 PNP Chief Ronald Dela Rosa checks the grenade launchers, high-powered guns and thousands of ammo seized from gun running group who reportedly supplies to the Abu Sayyaf Group and war lord in ARMM including politicians during a press briefing in Camp Crame, Quezon City. They were nabbed by the members of the Anti-Transnational Crimes Unit and Criminal Investigation and Detection Group on a Barangay West Came, San Juan City including one of the four suspect Unding Kenneth Isa (man smiling and wearing black behind Bato). INQUIRER / RICHARD A. REYES