The Philippine National Police’s Criminal Investigation and Detection Group (PNP-CIDG) seized P6 million worth of high-powered guns reportedly being supplied to the Abu Sayyaf Group from the alleged leader of a gun-running syndicate in an operation at a residential unit just a stone’s throw away from the PNP headquarters in San Juan City.

A cache of M203 grenade launchers, M14, M16 and thousands of ammunitions were seized from Unding Kenneth Isa, who once ran for Sulu vice governor but lost in the elections last May, and his three accomplices at No. 8, Unit 4, 3rd West Crame in Barangay (village) West Crame in San Juan City on Saturday.

The boxes containing the ammunitions were labeled with “Gov’t Arsenal DND,” which could refer to the Department of National Defense (DND).

Dela Rosa said most of the seized ammunition have been traced back to the government arsenal.

“We suspect that they have a contact within the government arsenal dahil paano nakakalabas tong mga bala kung wala silang contact (because how this ammunition get out if they have no contact)?” he said.

The operation stemmed from a tip the CIDG received sometime in July that Isa and a certain “Wahid,” both natives of Indanan, Sulu, were supplying guns to Abu Sayyaf bandits and war lords in the Autonomous Region in Muslim Mindanao (ARMM), delivering from Manila to Zamboanga, then to Jolo, Sulu, using SUVs.

The CIDG also revealed that in August, Isa, Wahid and some unidentified ASG members were in Manila to buy a cache of M203 and M14 firearms, explosives components, and thousands of ammunition, upon orders of an unidentified ASG commander. 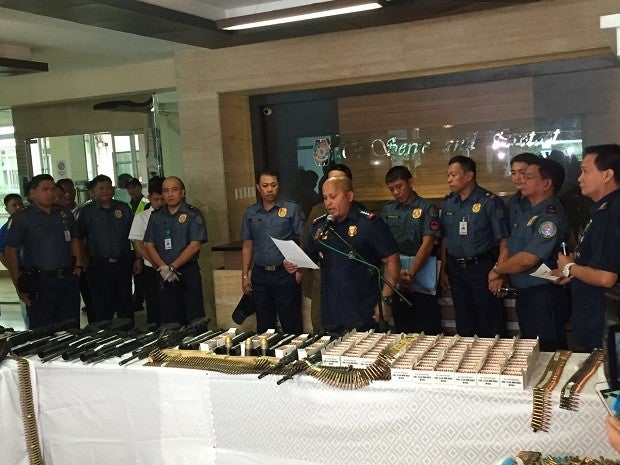 “Allegedly, the ASG is now strengthening their armaments to fight head-on with government forces in Sulu and Basilan, and to intensify their kidnapping and bombing operations,” Dela Rosa said.

The CIDG filed violations of Republic Act 10591 or the “Comprehensive Firearms and Ammunition Regulation Act) and RA 9516 (Illegal Possession of Explosives)” against the suspects after inquest proceedings. CDG/rga