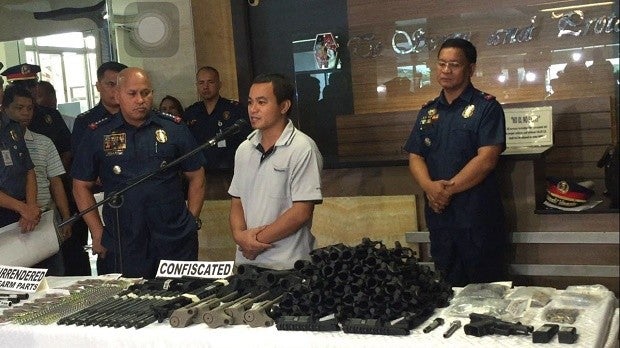 CIDG operatives arrested Wilford Palma and his boss Bryan Ta-ala last August 6 in bacolod City for selling smuggled gun parts from US. At a press conference Thursday, Palma said they sold several parts of M-16 rifles to a client who said he will use the guns to assassinate President Duterte. JULLIANE LOVE DE JESUS/INQUIRER.net

At a press conference on Thursday at Camp Crame, Philippine National Police chief Dir. Gen. Ronald “Bato” dela Rosa presented one of the arrested suspects Wilford Palma, who revealed that they sold gun parts that could be assembled into more than 100 M-16 rifles to a client who said “he will use the guns to assassinate President Duterte.”

Palma said he and his boss Bryan Ta-ala, who is currently confined at a hospital but is under police custody, sold “more than 100 upper receivers, 40 barrels, 30 bolt assemblies” to the client.

Dela Rosa declined to divulge the identity of the client while the investigation is ongoing.

(Most likely he’s not a “gun-for-hire.” He might only be working for a syndicate to buy these for that purpose.)

But Palma said the client bought the gun parts even before Duterte was elected into office.

CIDG director Chief Supt. Roel Obusan said the suspects used fictitious names and fake documents when claiming packages containing the contraband from US. The smuggled gun parts, usually placed in a “balikbayan box,” were shipped to the country through legitimate international cargo forwarders.

Dela Rosa said the US Homeland Security, which has been monitoring the shipping of Ta-ala, relayed the information to the Bureau of Customs and the CIDG.

(In the US, if they are purchasing this big an amount, that’s already considered as a questionable procurement. Especially because they are on alert when it comes to terrorism.)

The gun sellers are facing charges for violation of Republic Act. 10591 or the Comprehensive Firearms and Ammunition Regulation Act.

Dela Rosa also urged other clients to surrender the firearms they bought from Ta-ala’s group, or else the police will pursue them.

(They must surrender what they have purchased if they are just honest victims. They are victims because they were sold contraband.

If they surrender what they had bought, they won’t be pursued, but if they don’t, then they would be sought out. These parts are dangerous if they fall into the hands of unauthorized civilians.) CDG/rga