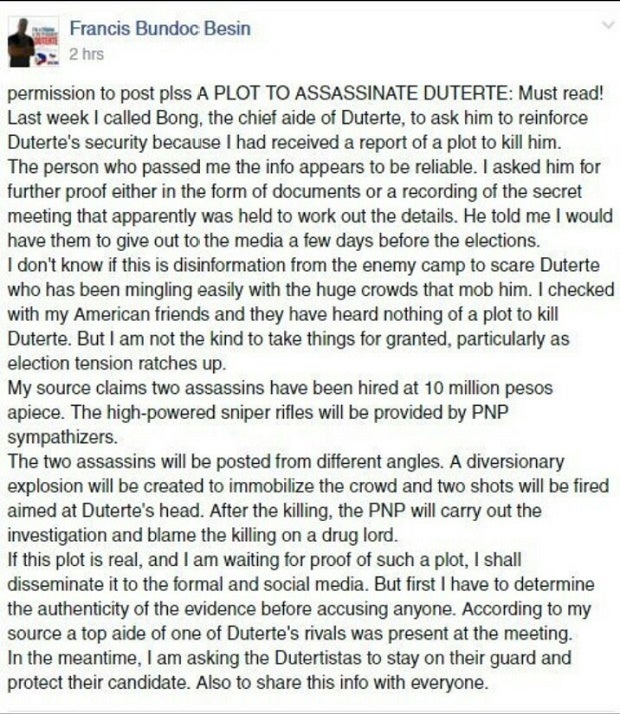 “I live my destiny kung ano ang destiny sa buhay ko, ‘yan ang masunod, kung mamatay ako sa kampanya (I live my destiny, and if I die in the campaign), that is my destiny,” Duterte told reporters in an ambush interview here on Wednesday night.

“Kung paabutin ako ng Panginoong Diyos, o ayaw niya (If God would allow me to continue to live or not), still that is destiny—that is the plan of God for me,” he added.

The tough-talking mayor was asked by reporters about an alleged assassination plot against him circulating on Facebook.

“I will not worry about death threat[s]. It comes naturally. Everything will be okay, everything, someday, will go away,” he said.

Sought for comment, Christopher “Bong” Go, in a text message, said Jose Alejandrino “cautioned us to be careful and alert.”

Go said Alejandrino phoned to tell him of the supoosed plot.

Asked about the credibility of the alleged plot, Duterte said, “I don’t know, it will be credible, maybe true or not. I said, if it is my destiny to die welcome, so be it, so be it.”

He said that keeping order “is the job of the police.”

Despite the alleged  plot, he said he would not intensify his security.

“No, kasi pag mamatay ako, mamatay talaga ako (if I die, so be it),” he said, insisting he would not intensify his security.

“Last week, I called Bong, the chief aide of Duterte, to ask him to reinforce Duterte’s security because I had received a report of a plot to kill him,” Besin in his post said.

He said the person who passed  the information to him “appears to be reliable.”

He said he has asked the person for further proof.

“I asked him [for] further proof, either in the form of documents or a recording of the secret meeting that apparently was held to work out the details,” Besin said.

“He told me I would have them to give out to the media a few days before the elections. I don’t know if this is disinformation from the enemy camp to scare Duterte, who has been mingling easily with the huge crowds that mob him,” he added.

But he said he ckecked with his American friends and “heard nothing of a plot to kill Duterte.”

“My source claims two assassins have been hired at P10 million apiece. The high-powered sniper rifles will be provided by PNP (Philippine National Police) sympathizers,” he said.

“The two assassins will be posted from different angles. A diversionary explosion will be created to immobilize the crowd and two shots will be fired aimed at Duterte’s head,” he added, citing his source.

After the killing, he said the PNP would carry out an investigation and blame the killing on a drug lord.

But despite the information he received, he said he has to check the credibility of the alleged plot.

“If this plot is real, I am waiting for proof of such a plot, I shall disseminate it to the formal and social media. But first I have to determine the authenticity of the evidence before accusing anyone,” he said.

“According to my source, a top aide of one of Duterte’s rivals was present at the meeting. In the meantime, I am asking the Dutertistas to stay on their guard and protect their candidate. Also to share this info with everyone,” he added.