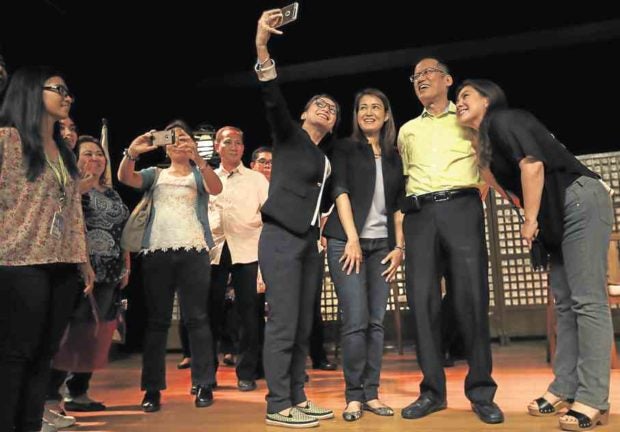 During his first public appearance since he stepped down from office on June 30, former President Benigno Aquino III found himself besieged by questions about martial law, current politics and, not surprisingly, his love life.

Among the questions he ducked—thanks to his self-imposed yearlong moratorium on speaking out about the present administration—was one that asked him to comment on today’s political environment.

“This is an observation and you don’t even have to comment … but nowadays is another case of creeping martial law,” one woman said.

The former President simply looked back at her and tried not to smile, drawing laughter and cheers from the audience.

At the forum on Friday night at St. Theresa’s College in Quezon City, Aquino met with several nuns from the Missionary Sisters of the Immaculate Heart of Mary, also known as the ICM nuns, who played a vital role in the antimartial law movement.

He talked with Sr. Iluminada Torres, also known as Sr. Luming, and Sr. Consuelo Varela, also known as Sr. Consuy, who both smuggled out of prison the letters of his late father, Sen. Benigno Aquino Jr., who was among the opposition leaders jailed by strongman Ferdinand Marcos during martial law.

The former President, however, refrained from further comment on the planned burial of Marcos at Libingan ng mga Bayani at the forum organized by the STCQC Alumnae Association (STAA) and STC High School Batch ’93.

“I’ve kept quiet about the Marcos burial because I’ve had so many years to say my point and it’s time to hear everybody else’s point. Haven’t they [now] shared their own stories?” Aquino asked.

There was a need, he added, to challenge continuing attempts to revise history and make the younger generation believe that martial law was good for the country.

“We need a permanent record of what actually transpired [given] the attempt to revise history. There was a generation that actually cannot imagine what our generation had to go through. When you cannot imagine, it is easy to say, ‘Yes, it is fiction’ and afterward, ‘That never happened. Therefore, we don’t have to be vigilant.’ And we are back to square one,” Aquino said.

The martial law video that was the heart of his final Independence Day speech as President at the vin d’honneur in Malacañang was also shown at the forum on the lessons of martial law.

In it, he narrated how his father and his fellow opposition leader, Sen. Jose “Pepe” Diokno, suffered in the hands of the dictator, and how the Filipino people collectively fought to regain their freedom.

“It has happened before and it could happen again if we allow it. What is important is we should not tell ourselves that for sure, this would never happen again,” Aquino said.

Without mentioning Marcos by name, Aquino said that “this person who was at the pinnacle of Philippine political power … had a chance to do something good for our country.”

But, he added:  “The bottomline is, [he] abused the Constitution by employing martial law to remain in power in perpetuity.”

In a light yellow, short-sleeved dress shirt, Aquino was in high spirits when he walked onstage as the crowd gave him a standing ovation.  Many more expressed their gratitude for his six-year presidency, saying he had made them proud to be Filipino and had been an inspiration to them.

As expected, the ever-burning question on his love life drew one of the loudest cheers from the crowd.

Aquino was also asked about life as a private citizen, to which he said he had so far read 16 books, listened to his CDs, watched DVDs, and continues to fix his music room.  The former President is a known audiophile.

To the millennials who asked for advice on how to be good citizens and leaders, Aquino said: “You have to know yourself and know what you want to do. Don’t rush yourselves.”

He added: “The most fortunate people in the world are those able to engage in something that they are happy with.”

The older members of the audience asked how they should engage people who appeared to have lost sight of the good, to which Aquino said the best option was still to engage one’s fellow citizens and not give up caring about what’s happening around.

Asked if he was going to seek an elected position again, he replied: “Can we just say if there is a need?  I don’t think anyone in my family has shied away from anything we should attend to.”

But, Aquino added, he was inclined—as he was before—to think of how going back to public service would impact on the people around him. TVJ