Cash for cops in drug war 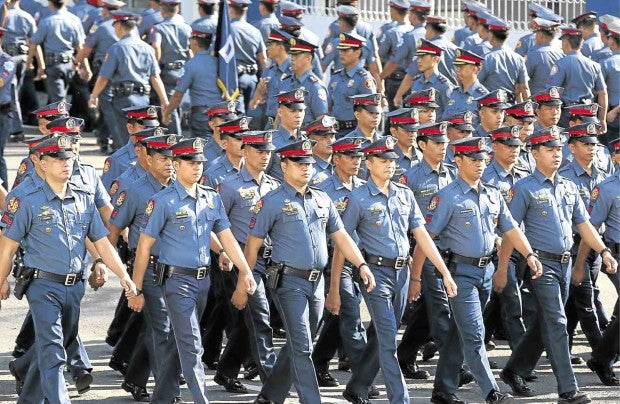 Policemen who take part in successful operations against drugs and terrorism will get not only medals but also cash rewards from President Duterte.

During visits to police camps in General Santos and Cagayan de Oro last week, Mr. Duterte announced that he would give police officers who had gotten medals for successful anticrime operations P200,000 each.

Mr. Duterte also exhorted law enforcers to continue the battle against the illegal drug trade and defended his administration’s campaign against narcotics, which has drawn concern from the United Nations, United States, European Union and international human rights organizations because of the extrajudicial killings of drugs suspects.

Since Mr. Duterte took office on June 30, police have killed more than 1,500 drug suspects who they say resisted arrest and unknown assailants have killed another 1,500 people, many of whom have been found with cardboard signs identifying them as drug pushers.

Mr. Duterte has said that many of the killings could be attributed to the drug syndicates, who are cleansing their ranks of unreliable members.

In his visit to the Police Regional Office in General Santos City on Friday, Mr. Duterte commended officers who were awarded medals for successful operations under “Project Double Barrel,” Malacañang said in a statement yesterday.

Among the awardees were Supt. Maximo Sebastian Jr., PO3 Marcial Inuguitan and PO2 Jeffrey Benito, who were given the Medalya ng Kagalingan (Medal of Merit) for busting a group of drug traders.

Sebastian heads the anti-illegal drugs task force in the region.

Also given the Medalya ng Kagalingan were Sr. Insp. Reynante Pascua and Sr. Insp. Renato Moreal for crushing a terror group and seizing its firearms.

The Palace did not identify the terror group.

In his General Santos City visit, Mr. Duterte also inspected the firearms that police had confiscated during their operations, including handguns, rifles, machine guns and grenade launchers.

During his visit to the Police Regional Office 10 in Cagayan de Oro City on Thursday, Mr. Duterte promised that the individual awardees from the region would get P200,000 each, while the unit awardees would get P250,000.

He also went to see SPO1 Ronald Eugenio at Capitol University Medical Center in Cagayan de Oro, where the officer was confined after being shot in the abdomen, jaw and throat during an anti-illegal drug surveillance operation last month.

He also promoted Eugenio to SPO2 on the spot and said he would help the officer, whose injuries left him unable to talk, to learn sign language.

In his speech in General Santos, Mr. Duterte insisted that many of the drug-related killings were carried out by those involved in the drug trade themselves, including corrupt policemen, and lamented that the deaths were being blamed on his administration.

“Did it ever occur to you that there was also a silencing stage for them? Mostly it’s just them involved, but they’re pinning the deaths on Bato (PNP Chief Ronald dela Rosa), on me, on the police. I mean, how stupid can you really get?” he said.

Mr. Duterte also claimed that his critics have failed to understand his actual directive to the police, which is to hunt down criminals and shoot them only if they resist and officers believe their own lives are in danger.

“That has not changed. If you follow me, you will have no problem, I will take care of you,” he said.

He reiterated his pledge that no police officer or soldier will go to jail by following his orders.

“Our country is facing hardships because of drugs,” he added. TVJ