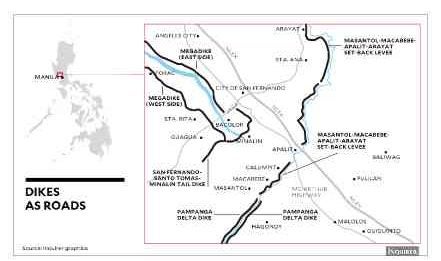 CITY OF SAN FERNANDO—Five dikes in Pampanga, built to contain floodwaters and lahar discharged by Mt. Pinatubo, have been serving as alternate roads spanning a combined 122.6 kilometers for motorists avoiding heavy traffic on MacArthur Highway and other national thoroughfares.

The levee, completed by the DPWH in 1975, replaced the Arnedo Dike that was built in 1940 to hold the water of the Pampanga River, which drains 30 river systems in Central Luzon to the Manila Bay. The levee’s 40 km of asphalt and gravel are traversed by tricycles, bicycles and cars.

On severe typhoons like “Pedring” and “Quiel” in 2014 as well as “Lando” and “Nona” in 2015, the levee works as an evacuation route, providing also refuge to residents who refuse to leave their homes.

The PDDP, finished by the

DPWH in 2002, provides 14.2 km each of dike on the right and left banks, making land travel possible for motorists to drive to the coastal villages of Macabebe and Masantol towns in Pampanga and Calumpit and Hagonoy towns in Bulacan province.

The FVR Megadike, spanning 56 km, was built in 1996 to trap lahar (volcanic sediments washed down by rain) within the Pasig-Potrero River.

A 15-km stretch in the eastern megadike runs all the way to Guagua, Bacolor and Porac towns and City of San Fernando, providing access to the Subic-Clark-Tarlac Expressway and Angeles City. A 15-km portion of the western megadike leads to Bacolor, Porac and Sta. Rita town.

San Fernando Mayor Edwin Santiago has suggested building an alternative road beside the megadike since the DPWH owns the right-of-way in that area.

The tail dike, partly funded by the Save San Fernando Movement and the Save Pampanga Movement, makes travel time shorter. The eastern side has a length of 9.5 km up to Sasmuan town proper while the western side, all of 9.7 km, leads to Guagua via the Sta. Ursula Bridge. The boundary of Minalin and Sto. Tomas towns provides a link to Masantol and Macabebe via the Culcul Road.
In Lubao town, a 5-km portion of the Porac-Gumain Dike connects to a road bypassing the perennial bottlenecks at Barangay Sta. Cruz there. Far down the dike are coastal villages of Lubao and Sasmuan previously accessible only by boat.
Because this maze of structures still operates as dikes, trucks with heavy loads cannot use them, according to Antonio Molano, DPWH director in Central Luzon. The DPWH has put up concrete barriers to stop big and wide vehicles from using dikes.
The top of the dikes is paved with asphalt and gravel and no fees are collected from users although foreign loans were spent to build these. Tonette Orejas, Inquirer Central Luzon