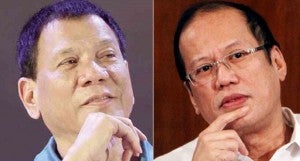 MANILA — Outgoing President Aquino congratulated on Thursday, his successor, incoming President Rodrigo Duterte, assuring the latter of an open communication line even after the end of his term on June 30.

It was the first time that Mr. Aquino and Duterte spoke on the phone since the outspoken and at times irascible Davao City mayor won by a landslide in the May 9 national elections.

A Philippine Daily Inquirer source said this meant that President Aquino has essentially opened the communication line between him and Duterte during the latter’s presidency.

The source said that incoming Executive Secretary Salvador Medialdea and Duterte’s executive assistant Christopher “Bong” Go went to Malacañang for a meeting with Executive Secretary Paquito Ochoa when the latter decided to introduce them to President Aquino.

In an official statement released Thursday night, Communications Secretary Herminio Coloma, Jr. said that Medialdea and Go, also the designated head of the Presidential Management Staff (PMS), were with other members of the transition committee.

“Executive Secretary Ochoa brought them to the President’s office and introduced them. Then the President invited them to a tour in the main Palace building,” Coloma said.

Go later shared with Malacañang reporters that Aquino and Duterte talked over the phone, although he did not reveal details of the conversation.  Go made the confirmation as he, along with Medialdea and incoming Secretary to the Cabinet Leoncio Evasco Jr. visited Malacañang Palace to meet with Ochoa.

Mr. Aquino and Duterte have yet to personally meet since the elections.

Go said Mr. Aquino and Duterte spoke while his group was visiting the Palace. It was unclear who called who, how long the two spoke, and what other matters were discussed.

The conversation happened a day after Duterte met with his Cabinet appointees in Manila for the first time since his proclamation. His camp would not say whether the President-elect returned to Davao City after dismissing his meeting past 11 p.m. Wednesday, or if he stayed in Manila for the night.

Without the Mayor, the Duterte group visited Malacañang for a largely undisclosed agenda, but Go is part of the committee making arrangements for Duterte’s inauguration at Malacañang’s Rizal Hall on June 30.

It would be the first presidential inauguration in the Palace since the late President Carlos P. Garcia’s 1957 oath-taking.  Garcia was vice president to President Ramon Magsaysay and took over as President when Magsaysay died in a plane crash.  Presidents usually take their oath at the Quirino Grandstand in Manila.

Go said Mr. Aquino brought the group around the Palace after their meeting with Ochoa and his staff.

“PNoy graciously toured us inside Malacañang Palace. He showed us around Rizal Hall where the inauguration will take place, after a short meeting with E.S Ochoa and staff,” Go told reporters.  SFM

(Note:  The 12th paragraph of this story was corrected to indicate that it was President Carlos P. Garcia, not Carlos Romulo, who last took an oath as President inside Malacañang in 1957.)