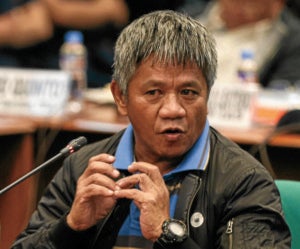 MANILA — The Senate committee on justice and human rights has set its next hearing of the alleged extrajudicial killings of drug suspects in the ongoing government war on drugs on Sept. 28.

This was announced by the committee chair, Sen. Richard Gordon, after the suspension Thursday night of his committee hearing. Gordon said he would hold two or three more hearings before concluding its inquiry.

To be invited to the next hearing are officials and witnesses of the Commission on Human Rights as well as the alleged 23 members of the Davao Death Squad, mostly policemen, identified by confessed hitman Edgar Maboto as his cohorts in executing criminals in Davao City, allegedly on orders from President Duterte when he was still mayor of Davao City.

Summoned to the hearing was SPO4 Arturo Lascañas whom Matobato said was the leader of the death squad.

Sen. Panfilo Lacson said senators would hold a caucus on Monday (Sept. 26) to talk about how to go about in dealing with the alleged DDS members. He had proposed to hold an executive session to hear their testimony.  SFM

Read Next
Duterte orders AFP to control militia in Mindanao
EDITORS' PICK
High inflation: Your P1 is now worth only 87 centavos
UK’s Boris Johnson will resign, BBC reports
Geek out at TOYCON 2022 powered by Smart Signature
House energy committee chair Arroyo bats for cheap electricity
High-risk pregnancy: Reducing your risk is in your hands
Unemployment rate up to 6% in May
MOST READ
Suspect in grisly killing of missing woman in Bulacan arrested
Hong Kong suspends flight bans as it eases COVID-19 rules
Kim Atienza’s daughter flaunts bikini body in response to critics of her ‘revealing photos’
Cop slain in Isabela ambush
Don't miss out on the latest news and information.