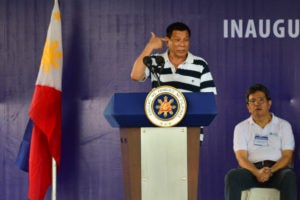 DAVAO CITY – President Duterte has ordered the military to take full control of the Bagani command, the paramilitary group accused of sowing fear among peasants and indigenous peoples in the countryside, saying allowing such group to operate will be a stumbling block to peace.

“I am now ordering the Army to take full control of the Bagani Command and the — there is another group I forgot the name, so many,” Duterte said, referring to various paramiliary groups being used in the counterinsurgency operations in the countryside.

“Mahinto na sana ito because we are really trying our best to come up with a peaceful country,” he said during a visit at the police regional command in Cagayan de Oro City on Thursday afternoon. “The communist have agreed to talk so we are talking.”

“This fighting in the mountain has been going on ever since. But you know, I have noticed from many reports that the government-backed paramilitary units are still operating,” he said.

“Paramilitary operating, especially with firearms issued by the government, that would undermine the peace process,” Duterte said. The Bagani has been linked to the killing of political activists, among them, the Italian priest Fr. Fausto Tentorio in Arakan, Cotabato, and a number of peasant leaders.

Hundreds of lumad from Compostela Valley and Bukidnon have been staying in Davao City for more than a year now after they have been harassed by Bagani and Alamara militias in their hometowns.  SFM