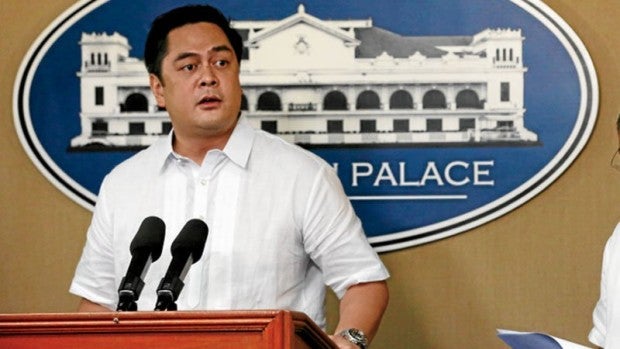 President Duterte again hurled invectives at Sen. Leila de Lima in his speech in Misamis Oriental on Thursday, but it was his supporters that Presidential Communications Secretary Martin Andanar chided and admonished to behave themselves.

“For the supporters of our President, let us be responsible with what we are texting. It’s not good to threaten our own. Of course, Senator De Lima is our senator.  She’s an elected official of the land,” Andanar said in a press briefing, referring to the flood of threatening text messages De Lima said she had received after convicted felons testifying against her in Congress revealed her phone number and home address in the televised hearing.

The senator said she had received invectives, insults and threats of violence through text messages after that public disclosure.

Andanar addressed the same appeal to Duterte trolls who have been harassing journalists on social media.

“I understand that social media is a free space. We can say whatever we want to say. But maybe my request is, let us not hurt each other with what we post on social media. Let us especially avoid threatening members of the media,” said the Palace official.

The President said he had been told that correspondents of international networks and publications have been the subject of several threats.

“I appreciate very much your support and maybe your—how would I say it—enthusiasm to back me up,” he told his supporters.

“You are correct, I am doing nothing wrong, I agree with you. But, of course, we should not threaten people because they would be unable to write the truth,” Mr. Duterte added.

Andanar meanwhile assured De Lima about her security concerns amid allegations of her link to the drug trade in the national penitentiary in the ongoing House hearing presided over by Justice Secretary Vitaliano Aguirre.

“Everyone is assured. We’re all Filipinos, we’re all citizens of this beloved country. All Filipinos have the right to be given security by the police and the military,” he said.

De Lima has denied claims by convicted criminals presented in the House hearing that she had received kickbacks from the sale of drugs as a form of fund-raising for her senatorial campaign.

But Mr. Duterte, speaking at a power plant inauguration in Misamis Oriental on Thursday, resumed his attack on De Lima when he talked about his administration’s war against illegal drugs.

The President riled that when she was chair of the Commission on Human Rights, De Lima had criticized him for his alleged links to the Davao Death Squad, but had never filed a case against him.

“She was building a name at my expense to be popular,” Mr. Duterte said.

The tough-talking official added:  “So what now? She was not only screwing her driver, she was screwing the nation!”

Mr. Duterte also claimed that the senator’s “propensity for sex” led her to this situation.

If De Lima were his mother, he would have shot her, he added.

The President earlier alleged that De Lima’s driver, who was also her lover, had collected money for her from the drug trade at New Bilibid Prison. With a report from Germelina Lacorte, Inquirer Mindanao