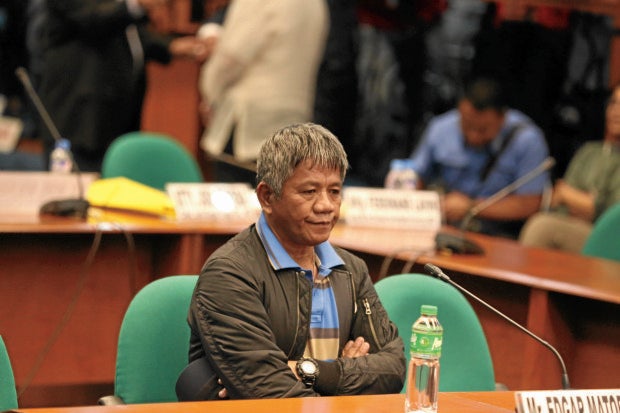 Confessed hit man Edgar Matobato on Thursday insisted that he and five other men killed alleged terrorist Sali Makdum on orders of SPO4 Arthur Lascaña, the leader of a liquidation squad linked to President Duterte when he was still mayor of Davao City.

Matobato, 57, continued his testimony about the killing of about 1,000 criminals and opponents of Mr. Duterte in gangland-style assaults at the resumption of the inquiry into alleged extrajudicial killings in the President’s brutal war on drugs by the Senate committee on justice and human rights, now headed by Sen. Richard Gordon.

Senators led by Alan Peter Cayetano and Panfilo Lacson as well as Gordon grilled Matobato on the consistency of the testimony he gave on Thursday in which he pictured Mr. Duterte as a cold-blooded killer.

Alliances became apparent during the proceedings, with the allies of Mr. Duterte who voted to oust Sen. Leila de Lima as committee chair on Monday leading the questioning.

Sen. Manny Pacquiao, the Bible-quoting world boxing champion and Duterte ally, asked why the public should believe a witness whom he described as inconsistent.

De Lima and Sen. Antonio Trillanes IV, who had both vouched for Matobato’s credibility, called out their colleagues on the tenor of their questioning, giving the witness a chance to clarify his statements when it was their time to ask.

De Lima’s allies from the Liberal Party were absent from the hearing.

Grilled for more than three hours mostly by Mr. Duterte’s allies, Matobato at one point made an emotional plea, saying his former companions in the so-called Davao Death Squad (DDS) were out to kill him.

“I came here even if I’m illiterate. I volunteered to come here. I did not kill for money, but because we won’t get caught because the police were with us,” Matobato said, wiping away tears.

“Even if they hang me, I’m telling the truth. Just the truth. All I want is justice. I saw how the [New People’s Army] beheaded by father. Now I don’t know where to find justice, just like the people we killed are looking for justice,” he said.

One of the exchanges came after Matobato was asked about the killing of Makdum, a suspected terrorist from Pakistan, in 2002.

Cayetano presented at the hearing a CNN video interview in which Makdum’s relatives said Matobato knew Makdum, as the two men were discussing a land deal.

In his testimony on Thursday, Matobato said he and five other members of the DDS kidnapped Makdum from Samal Island in 2002 and took him to the office of the former Presidential Anti-Organized Crime Task Force.

He said they garroted Makdum, quartered and buried him in a quarry.

Confronted with the CNN video, Matobato admitted he knew Makdum, as the Pakistani’s Filipino wife was the cousin of his wife, and confirmed they were in discussion of a land deal. He also said he had known Makdum for three months.

Matobato said he did not know Makdum was a terrorist until he was informed about it at the police heinous crime unit’s office.

“I never knew he was a terrorist,” he said. But he told the unit that he knew the Pakistani.

But he said he did not know who ordered Lascaña to take down Makdum.

Cayetano told Matobato that in his testimony last week, he said Mr. Duterte ordered the killing of Makdum.

“So it was not Mayor Duterte who gave the order,” Cayetano said, and Matobato replied that he did not know.

It was at this point that Trillanes jumped in, saying Cayetano was “giving wrong information” because Matobato did not say last week that Mr. Duterte ordered Makdum killed.

“Let us not twist the story,” Trillanes said.

Gordon told the senators to refer to the transcript.

Cayetano explained that he was just testing Matobato and that the witness was free to say he never said Mr. Duterte gave the order to kill.

Matobato later told Cayetano that he was getting confused, and admitted that he did not hear Mr. Duterte directly give orders to kill but had seen him talking to Lascaña, whom he identified as leader of the DDS.

Cayetano also tested the credibility of Matobato’s account last week that it was Mr. Duterte who killed National Bureau of Investigation agent Vicente Amisola in 2007.

In his testimony last week, Matobato said Amisola’s vehicle impeded a DDS mission, which lead to an altercation that deteriorated into a shoot-out. The agent ran out of bullets and was wounded, he said. Mr. Duterte, he said, arrived and finished the agent off by emptying two Uzi magazines on him.

Cayetano said he found “incredible” Matobato’s account that 30 men were unable to kill Amisola during the shoot-out.

“This means you are all good killers,” Cayetano told the witness.

Matobato denied saying 30 men shot it out with Amisola. He said the agent, who was armed with a Glock pistol with an extended magazine, used his vehicle as cover and fought back.

“But (Amisola) ran out of ammunition and he was taken,” Matobato said, adding the agent was still alive when Mr. Duterte arrived carrying an Uzi submachine gun.

“It was the mayor who ended (Amisola’s) life,” he said.