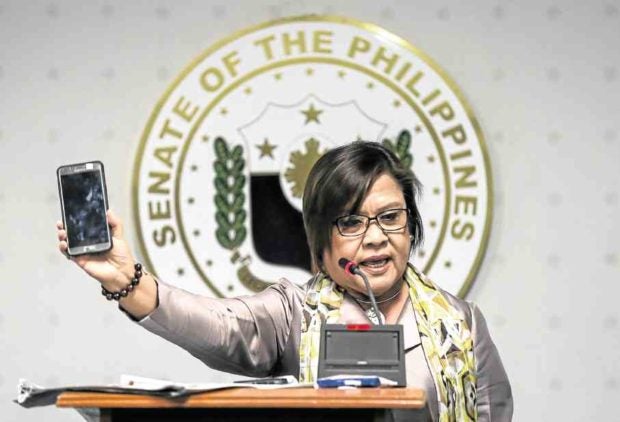 FIGHTING BACK Sen. Leila de Lima disputes the allegations raised by inmates during a hearing of the House committee on justice on the illegal drug trade atNew Bilibid Prison. LYN RILLON

Sen. Leila de Lima on Thursday said Jaybee Sebastian, a convicted car thief and a powerful gang leader, was her “asset” who provided information on the illegal drug trade at New Bilibid Prison (NBP) that as justice secretary in the Aquino administration she had attempted to crush.

But, De Lima, at a news conference called to deny allegations she received protection money from NBP drug lords to fund her senatorial campaign in May, declined to elaborate.

“The reason I’m saying he’s an asset is to dispel speculations, malicious insinuations that the reason why he was not transferred like the Bilibid 19 because he was favored, protected and the insinuation that he collects money for me,” De Lima said of Sebastian.

The Bilibid 19 referred to the 19 drug lords transferred to the National Bureau of Investigation jail after a raid on the national penitentiary she led in December 2014.

Some inmates who testified at the hearing conducted by the justice committee of the House of Representatives claimed that they did not directly give to De Lima money but they either deposited cash or asked their referrals to make deposits to bank accounts controlled by her lieutenants, including Sebastian, who emerged as the “king of drug lords” after centralizing drug operations at NBP following the 2014 raid.

De Lima said that if Sebastian would testify in the House inquiry, he could address that matter but noted she would not also be surprised if he would testify against her.

The senator said Sebastian was not immediately transferred to the NBI jail because he was giving the department information on the NBP drug trade.

But she said she eventually ordered Sebastian to be transferred to the NBI jail when Rainier Cruz became the chief of the Bureau of Corrections (BuCor).

She also urged the House to invite former BuCor Chief Franklin Bucayu to share operational details of the 2014 raid.

De Lima also said she was gathering information on the witnesses who testified against her because the initial information was they did not want to do so.

She said she was getting information on how they were convinced to testify against her.

She reiterated that some of the witnesses could have been pressured to do so, some had “an ax to grind against her,” some had “skeletons in the closet” and were blackmailed or paid.

De Lima said she knew that one inmate was taken to Intelligence Service of the Armed Forces of the Philippines and was “psychologically tortured” to force him to speak against her.

She said a former Philippine Drug Enforcement Agency (PDEA) official, Lt. Col. Ferdinand Marcelino, was being pressured by some groups to speak against her after Marcelino was reported on Wednesday to be facing illegal drug charges after the Department of Justice (DOJ) had reversed its earlier dismissal order.

A July 19 text had Marcelino revealing that some groups were “trying to convince me to speak against (De Lima).” But he assured the person he was texting he would not be used and he “never doubted her integrity.”

A second text, on Sept. 9, said Marcelino had complained of “mounting” pressures and that his drug case would be reopened.

“But rest assured that I will never give in to them mistah. Pls tell Sen L to keep faith and be strong,” Marcelino said in his text message, which De Lima shared to reporters.

Responding to Director Benjamin Magalong’s claim that the Philippine National Police was excluded in the December 2014 raid on NBP, De Lima explained that it was the DOJ that was on top of the operations but that they also used PNP units in the raid.

De Lima said Magalong, the deputy PNP chief for operations and former Criminal Investigation and Detection Group head, could have been “frustrated” when he made those statements.

She said Magalong admitted in the House inquiry that his office and the PDEA did not like what happened.

“I have no problem with Magalong. I perceive him to be a professional official,” she said.

De Lima took offense to statements that there was an official higher than she who was also linked to illegal drugs.

She said “the only one higher than me” was President Aquino himself.

“So are they saying my President is also a beneficiary of these things? Of course not, you know P-Noy,” she said adding these statements were “outlandish, very outrageous.”