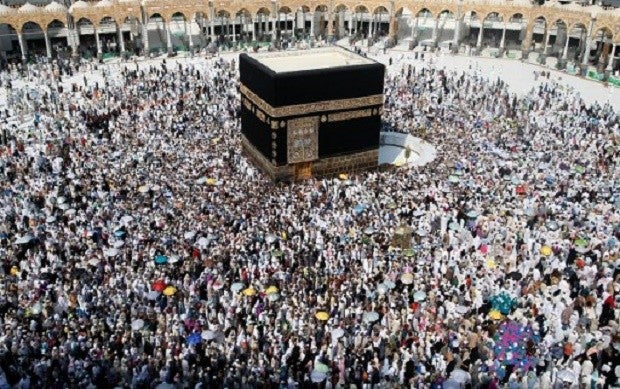 The bracelets are a reassurance to some pilgrims, though their distribution has been far from systematic ahead of the formal start of the hajj on Saturday.

Saudi Arabia announced an investigation into last year’s stampede which happened during the hajj stoning ritual, but no findings have ever been published.

Public statements and Saudi press reports show that changes have been made to prevent overcrowding even though no one was ever blamed for the tragedy.

After the disaster — the worst ever in hajj history – some foreign officials expressed concern about difficulties in identifying the dead.

Saudi officials have stuck with a death toll of 769 issued shortly after the stampede but data from authorities in more than 30 countries gave a figure almost three times higher.

Each plasticized paper bracelet carries a bar code readable by smartphone. It indicates the pilgrim’s identity, nationality and place of lodging in Mecca.

Additional data includes a contact in the pilgrim’s delegation and details provided when his or her visa was issued, the vice secretary of the ministry of hajj and umrah, Issa Rawas, told AFP.

“The aim is to equip all pilgrims” from abroad, who are expected to number more than 1.4 million, he said.

Rawas did not specify the number of bracelets issued so far.

In the crowds which fill the Grand Mosque and its surroundings day and night, AFP saw numerous pilgrims wearing bracelets.

But some were issued by travel agents and don’t include the information stored in the government’s bracelet.

Nabil Melhem, 61, a Palestinian bricklayer, wears one of the official bracelets, which he said cost about two riyals (53 cents).

It is “like a passport,” said Melhem, from the Israeli-occupied West Bank.

The bracelet is two centimetres (almost an inch) wide and colored green for pilgrims from Arab countries.

“If we get lost, if we die, if we are sick or unable to talk, they can contact our delegation, thanks to the bracelet,” he told AFP.

Drissa Conakry, a Nigerian pilgrim, said hotel staff “put this bracelet on us as soon as we arrived”.

Conakry, 30, a teacher, said the bracelet, colored mauve for African pilgrims, provides a measure of comfort.

“I tell myself that, at least, I am identified.”

Behind her, four Australian pilgrims move closer, intrigued by the device. They tell AFP they have not received the bracelets.