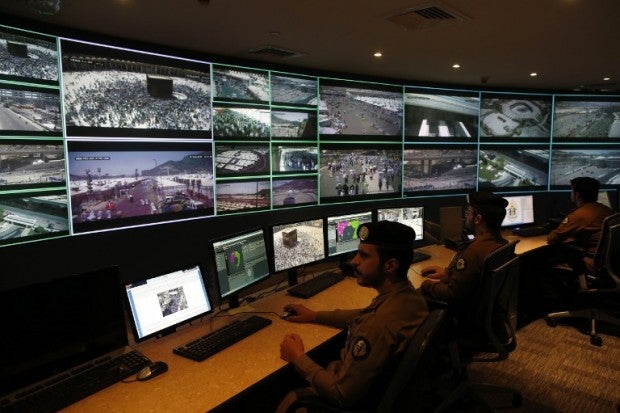 Saudi soldiers are seen on duty at the command and control operation center in Mina near the holy city of Mecca, on September 13, 2016. The control center monitors footage from over 5000 cameras streaming live videos of the 1.8 million pilgrims from all over the world taking part in the annual hajj.  AFP

MINA, Saudi Arabia — Under a bank of monitors broadcasting live footage from more than 5,000 cameras, Saudi officers have kept their eyes on every route and gathering spot at this year’s hajj pilgrimage.

As custodians of the most sacred sites in Islam, the authorities have been at pains to assure the world that every possible measure has been taken to prevent a repeat of last year’s disaster at the hajj that cost the lives of around 2,300 pilgrims in a stampede.

An “eye” which never closes forms the heart of the command and control center located in Mina, near Mecca, said Colonel Saad al-Dosari, its planning chief.

Another officer, Captain Tareq al-Azam, told AFP that his dozens-strong team has been on duty around the clock monitoring this year’s 1.8 million pilgrims who have converged on the desert kingdom from across the globe.

More than 5,000 cameras have been installed in the entire Mecca sector covering a radius of around 10 kilometers (six miles) around its Grand Mosque, the single holiest place in Islam.

From his vantage point, the captain can direct the cameras and is able to zoom in to investigate any suspicious-looking or potentially dangerous activity.

The job of the security team was “to survey the screens to detect any problem or any blockage” in the constant stream of pilgrims navigating the holy sites, explained Dosari.

If any anomaly is detected, “they inform the operations center to prevent any problem before it can even happen”.

Dozens of soldiers are posted at the center, located a few meters (yards) away, with headphones on and microphones at the ready to pass on information to the tens of thousands of members of the security forces on the ground.

They also redirect any complaints from the pilgrims on a special number provided by Saudi authorities, who have said this year’s hajj which started last Saturday and ends on Thursday has been free of any major incident.