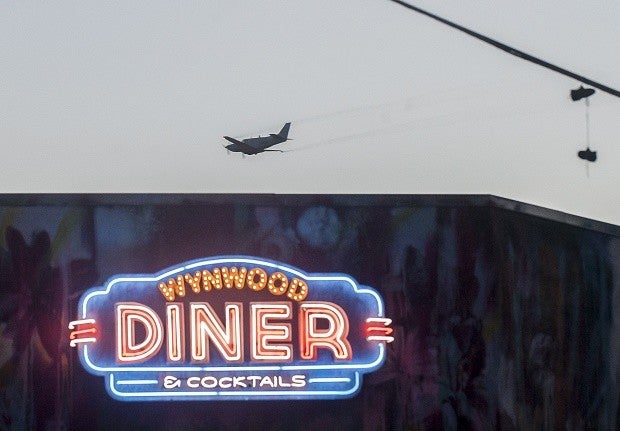 This Aug. 4, 2016 photo shows a plane conducts mosquito control aerial spraying over Wynwood area of Miami, Fla., and the surrounding areas in order combat the spread of Zika. Miami-Dade County officials say they’re delaying the aerial spraying of an insecticide called naled over South Beach following concerns voiced by residents and local officials. County Mayor Carlos Gimenez said in a statement Wednesday, Sept. 7 that the spraying to fight the Zika virus scheduled for Thursday morning was moved to Friday morning. Additional sprayings are scheduled for Sunday and the next two weekends. AP

MIAMI BEACH, Florida — In the only US city confirmed to have mosquitoes carrying the Zika virus, some residents say they’d rather be bitten than be exposed to droplets of chemicals sprayed from planes to kill the bugs.

No assurances from health officials would calm some 200 people packing a Miami Beach City Commission meeting Wednesday. They cursed elected officials and the US Centers for Disease Control and Prevention for mixed messages about aerial spraying over South Beach and refusing to detail all locations where adult mosquitoes have been isolated with the virus.

“At first they said they couldn’t do aerial spraying, but then they said yes,” said Sadie Kaplan, a fitness trainer who fled her home twice to avoid the spraying. “Pick a side. Don’t flip-flop.”

Some argued the mild flu-like illness that Zika causes in most people doesn’t warrant aggressive pesticide use, even booing a doctor presenting evidence of Zika-related birth defects to city commissioners.

“I don’t want to be sprayed with pesticides for what I believe is a hoax,” said Kiro Ace, a graphic designer who was shirtless but wore a gas mask as he joined protesters chanting, “If you’re going to spray, we want a say!”

At issue is the use of naled, an insecticide sprayed since the 1950s for mosquito control in the US It’s currently being used in Miami Beach at levels deemed safe by the CDC and the US Environmental Protection Agency. It’s banned from personal use in homes, but the EPA says there’s no evidence it causes cancer.

An EPA fact sheet on naled says people exposed to high concentrations can experience nausea, dizziness and confusion. At extremely high concentrations it can be fatal. Ten naled-related calls have been reported to the Florida Poison Control Information Network since Aug. 1, but there’s no confirmation of any pesticide exposure or illness, Florida Department of Health spokeswoman Mara Gambineri said in an email.

EPA said a review of its records found only a “handful” of cases over the past 15 years where naled harmed people. EPA said the majority of incidents included minor burns, skin irritation or headaches with no deaths. Agency spokeswoman Nancy Grantham said the numbers are low, considering Florida sprayed about 338,000 pounds of naled on about 6 million acres in 2014.

Not everyone in the community agreed that naled should be ruled out, and on Friday officials confirmed a fifth mosquito sample was found with Zika in the same area of Miami Beach.

Dr. Christine Curry, a University of Miami OB-GYN who is treating Zika-infected women in the affected area, reminded the skeptical audience that there’s real health risk.

“There are four women I have spoken to in the last several weeks who have not left Florida and who are suspected to have gotten their infection in our community,” she said to boos and jeers. “I frankly don’t care which compound we decide to use or not use for mosquito control. I care that we choose an option that this community agrees on.”

However, naled use can harm the environment. About 2 million honeybees died last month in South Carolina after some beekeepers weren’t notified about aerial spraying, the South Carolina Department of Pesticide Regulation confirmed.

Puerto Rico’s governor has refused to authorize the CDC to use naled to fight Zika there, despite widespread infections on the island, amid outrage over its potential effects on people and wildlife.

Officials did say children should stay inside during spraying.

“We don’t think this poses a big risk, but people need to avoid unnecessarily being exposed to it. If aerial applications are occurring … don’t let your kids out to play,” said Jack Housenger, director of EPA’s Office of Pesticide Programs. “If toys are outside, be sure to wash them off. Use common sense.”

So far, no beekeepers or conservationists have complained about naled spraying over Miami’s Wynwood district last month and over South Beach since last week, Miami-Dade County mosquito control spokeswoman Gayle Love said in an email.

Florida health officials say those are the only areas where mosquitoes have been actively transmitting the Zika virus. Aggressive pesticide spraying could extend beyond the urban neighborhoods, though, if another outbreak is confirmed elsewhere.

The only beekeeper registered in Miami Beach, attorney Darius Asly, said he’s still concerned about the government’s handling of the fight against Zika. He wants better coordination among agencies.

“If I must lose my bees in order to prevent that some poor mommy should have a sick child — I’d have to be a real jerk to be opposed to that,” Asly said.

City commissioners appear to be listening, even though they admit naled may be their most effective tool. Amid the shouts at Wednesday’s meeting, they passed two resolutions urging county and state officials to investigate alternative mosquito-control methods.

Spraying in South Beach is scheduled to continue this weekend. City officials said they didn’t want it, but their hands were tied by a public health emergency declared by Gov. Rick Scott in February.