Keeping track of users a challenge in Pampanga | Inquirer News

Keeping track of users a challenge in Pampanga 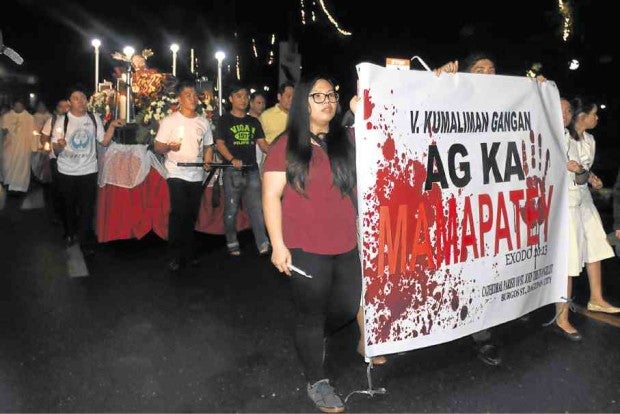 PARISHIONERS, members of the Philippine National Police, priests and nuns and families of victims join the candlelight procession along Dagupan City streets on Sept. 14, after a Mass offered for the hundreds who were killed in the drug war.
WILLIE LOMIBAO/INQUIRER NORTHERN LUZON

CITY OF SAN FERNANDO—What happens to people who surrender to the police under government’s “Oplan Tokhang” after admitting using or peddling illegal drugs?

Keeping track of these people has become a major challenge for the police, said Chief Insp. Michael Jhon Riego, head of the Pampanga police operations.

Because none of these people has been charged with any crime, police and village officials have to rely on them to routinely turn up and report to them.

Monitoring these people  has become a tedious task for officials because none of them could be detained or confined. But all of them had signed a document indicating that they would submit to periodic house visitation by the police and members of the Barangay Anti-Drugs Abuse Council.

They are also required to report to the barangay captain at least once a week, participate in physical fitness activities, undertake community service and undergo routine drug tests.

They also expressed their willingness to be confined at a rehabilitation center should doctors confirm their addiction had reached a severe stage.

But during an antidrug summit on Sept. 14, Riego reported that only 5,532 drug abusers and traffickers regularly participate in physical fitness activities such as sports games and Zumba dancing.

He said 2,504 of them were employed and could not participate in those events while 223 others had since relocated. Eighty of them had been arrested for illegal drug peddling while six had been killed in buy-bust operations.

It is not enough to make drug users give themselves up, said Dr. Joseph Gene Ponio, a psychiatrist, adding that 70-80 percent of them have depression. Most do not know how to withdraw from the addiction and their success at kicking the habit hinges on the aid of a support group, he said.

Making sure the confessed abuser stays clean would soon become a village responsibility, he added.

In Pangasinan province on Wednesday, Catholic churches in the Lingayen-Dagupan archdiocese posted banners with the words “Do not kill,” in their renewed call to stop the killings in the drug war.

“Within only a few months, almost 3,000 have died. Not from illness, not from earthquake, not from typhoon, but from the hands of fellow men,” said Lingayen-Dagupan Archbishop Socrates Villegas in his homily at Mass he led at St. John the Evangelist cathedral in Dagupan City.

The Mass was held in observance of the Day of Prayer for Life and was offered for the souls of those who were killed in police encounters and vigilante activities. The Mass was followed by a candlelight procession of the Santo Entierro (Dead Christ). With a report from Gabriel Cardinoza, Inquirer Northern Luzon