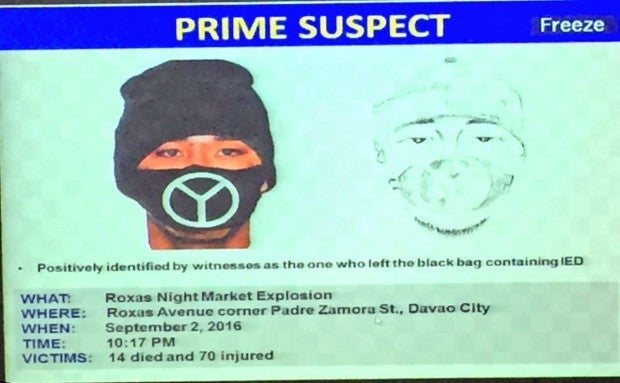 The artist’s sketch of the suspect in the bombing of a night market that killed 14 and injured more than 70. JULLIANE LOVE DE JESUS/INQUIRER.net FILE PHOTO

The Davao City police is set to file murder complaint against the primary suspect behind the deadly blast in Davao City that claimed the lives of 14 persons and injured 71 others.

“We have identified the suspect and we are filing a case against him today,” Senior Supt. Michael John Dubria, chief of the Davao City police, said in a press conference in Davao City on Wednesday.

Dubria, however, declined to disclose the identity of the suspect, who left a black bag containing a homemade bomb at the Roxas night market last September 2, while the investigation is ongoing.

But he said the police are looking into the male suspect’s possible connection with any terror group or syndicate.

“We are currently investigating his affiliation. We just cannot go on accusing or trying to identify him with any specific group. That is still an intelligence job. I don’t want to make a premature statement about it,” he said.

“As of the moment, we have identified the suspect and soon that information will be released to the public,” Dubria added.

Davao City Mayor Sara Duterte has offered a P3-million reward for the arrest of the culprits behind the explosion.

He said the police invited at least 11 persons of interest for questioning as well as the blast victims. The artist’s sketch of the suspect was formed based on the descriptions of the witnesses.

Asked to comment on reports that the suspect is still hiding in Davao City, the police official said: “Actually, we are working on that. We are getting information. We are trying to track him down.”

Dubria also refused to confirm whether the deadly explosion was perpetrated by “narco-politicians” following the arrest of Talitay Vice Mayor Abdulwahab Sabal of Maguindanao and three others for their alleged involvement in the bombing.

Aguirre said Sabal, along with wife Mohanna Sabal, bodyguard Nasser Maulana and driver Norodin Abas were presented for inquest to the Department of Justice (DOJ) after their arrest at the Cotabato City airport last weekened.

“If (PNP chief Dir. Gen. Ronald “Bato” dela Rosa) said that then he has all the resources to validate that information. It is a higher level information and as of the moment, I can only speak for Davao City police,” Dubria said.

Read Next
Condominium blamed for obstructing Naia flight path
EDITORS' PICK
Look Through: The fate of impounded stray dogs
House energy committee chair Arroyo bats for cheap electricity
What to watch out for when selecting a video surveillance solution
23,000 cops to be deployed nationwide for school reopening
Unleash the photographer in you this World Photography Day with vivo smartphones
DOH says COVID-19 cases plateauing, but public shouldn’t be ‘complacent’
MOST READ
Korina Sanchez reunites with former ABS-CBN co-anchors Julius Babao, Cheryl Cosim
Sharon Cuneta asks for prayers for friend in ICU who suffered silent stroke
QC school’s shutdown violated rules – CHEd
Light therapy could be the answer to your sleep problems
Don't miss out on the latest news and information.