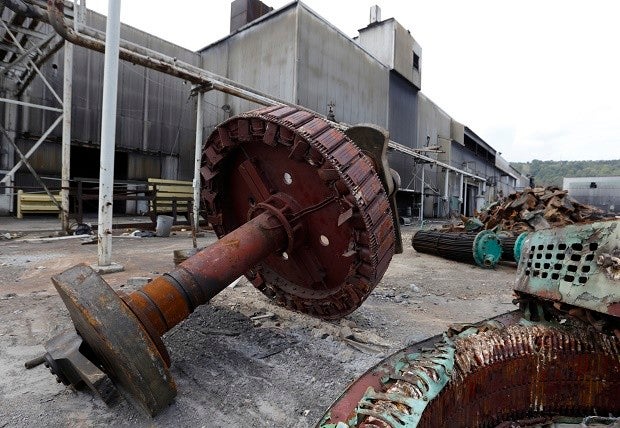 In this Thursday, Sept. 8, 2016, photo, a gear from an air compressor that provided plant air for the former Ormet plant lies on the ground at the site in Hannibal, Ohio. For decades, many workers in the area found work at the aluminum plant…union jobs, with good pay and generous benefits. But due to stiff price competition from China, the plant closed in 2014. Republican presidential candidate Donald Trump is viewed as a champion to many here who say America’s political leaders have stood by while competition from China and other countries has wrecked communities like Hannibal. AP

HANNIBAL, Ohio — Crushed by Chinese competition and feeling betrayed by mainstream politicians, workers in the hills of eastern Ohio are embracing Donald Trump and his tough talk on trade.

For decades, they and others living across the Ohio River in West Virginia found work in coal mines and at a local aluminum plant — union jobs, with good pay and generous benefits.

But those jobs are going, if not gone.

Coal is being wiped out by stricter environmental rules and competition from cheap natural gas. The aluminum plant? It’s out of business, doomed by China’s domination of the global aluminum market.

In an angry election year, some of America’s angriest voters live in places like Monroe County where local economies have been punished by price competition with China. Their frustration has fueled support for the Republican presidential nominee, with his belligerent rhetoric about the need to outsmart America’s economic rivals, tear up unfair trade deals and re-establish America as the world’s dominant player.

“This is Trump country,” says John Saunders, an official with the United Steelworkers in nearby Martins Ferry, Ohio.

The disaster that’s unfolded here isn’t obvious at first glance, not in a region known as the Switzerland of Ohio for its forested, rolling hills. In tiny Hannibal (population: 411), stately two-story homes overlook lawns that roll toward the banks of the Ohio.

But the misery is real. Monroe County’s unemployment rate is Ohio’s highest at 10.2 percent. Families have moved out to find work.

“You’re going to have to travel to find a job,” says Fran Poole, whose husband, Cecil, worked at the Ormet plant here for 37 years before being laid off when it closed.

Some laid-off workers chose to retire early. Others found work in the energy business, only to see those jobs melt away, too, as oil and gas prices fell. Some are doing odd jobs — cutting grass, hauling gravel.

Much of the damage to this region can be traced to China’s decision to become self-sufficient in aluminum production. Aluminum is used in construction and auto manufacturing, aerospace and consumer-product packaging. The surge in its production reflected a broader Chinese strategy: pour money into manufacturing to add jobs and accelerate economic growth.

Fueled by government subsidies and cheap loans from state-owned banks, Chinese aluminum producers went into overdrive: In 2000, the United States had produced a world-beating 15 percent of all aluminum, China just 11 percent. By 2015, China had escalated its output nearly 1,200 percent — and held 55 percent of the world’s share.

As Chinese aluminum flooded the world, prices collapsed. US production has tumbled 56 percent since 2000, according to the US Geological Survey. And America’s share of world aluminum is below 3 percent.

Since 2011, US aluminum companies have closed or idled nine of the 14 US smelters. Two surviving plants are running at half capacity or less.

Longtime residents recall how vital the Ormet plant here was for the area’s economy and for supporting middle-class lifestyles. Workers regularly vacationed and bought houses and boats and all-terrain vehicles to tear up the Ohio countryside.

“If you didn’t go to college or the military, you went to the coal mines or Ormet,” says Bill Long, a former Ormet laborer who is a supervisor at the county’s Department of Job and Family Services.

The factory drew workers from the hills of West Virginia and eastern Ohio, paying them about $40,000 a year before overtime. Overtime was “sporadic,” recalls Carl Davis, a former Ormet worker who is now a Monroe County commissioner. “But a few were known to gross around $100,000.”

“Even though the work was hard back then, it was best job I had ever had, and the most money I’d ever had my hands on,” says Francis Blackstone, a 70-year-old Ormet retiree. “And the benefits were just unheard of” — including free health care.

Through most of the 2000s — aside from a sharp drop during the Great Recession — world aluminum prices had withstood the surge in supply from China. China’s own economy was growing so fast its demand for aluminum was nearly insatiable. Then its economy decelerated after 2010, and aluminum prices plunged.

Desperate, Ormet and the Steelworkers union sought to renegotiate electricity prices from the local utility, Appalachian Power. In 2012 and 2013, they urged Gov. John Kasich to lean on the state utility commission to help. Kasich wouldn’t intervene, leaving the decision to the commission.

The plant went out of business.

Aluminum prices were so low the plant might not have survived anyway. But Kasich’s refusal to intervene helps explains why animosity for the governor runs high in these parts. In the March Republican presidential primary, Monroe County overwhelmingly backed Trump and rejected Kasich, who otherwise won his home state handily.

Trump is viewed as a champion to many here who say America’s political leaders have stood by while competition from China and other countries has wrecked communities like Hannibal.

“He says what a lot of people would like to say,” says Cecil Poole.