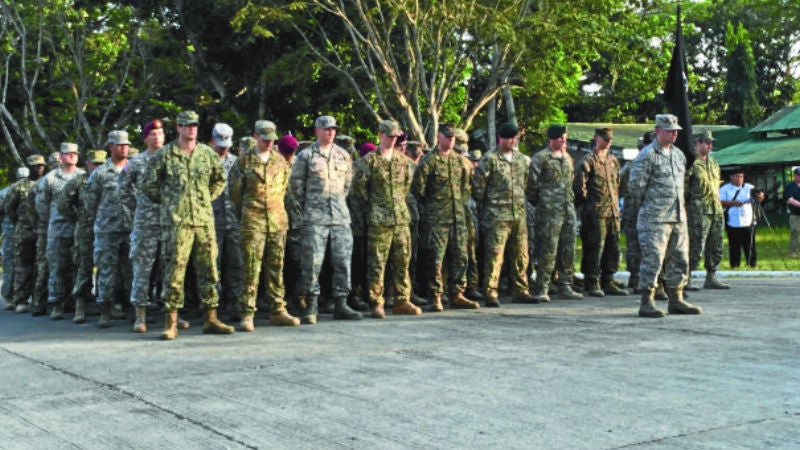 ZAMBOANGA MISSION About 50 US soldiers on formation witness the ceremonial folding of the flag of the Joint Special Operations Task Force Philippines at the Western Mindanao Command grandstand in Zamboanga City in this photo taken in February 2015. President Duterte has said American forces are magnets of terrorist attacks in Mindanao. JULIE ALIPALA/INQUIRER MINDANAO

DESPITE his assertive statements criticizing the United States and underscoring the country’s sovereignty, President Duterte on Tuesday said his administration was not about to cut ties with close allies of the Philippines.

“We are not going to cut our umbilical cord with the countries that we are allied now,” Mr. Duterte said in a speech at Villamor Air Base in Pasay City.

The Philippines, he added, would not be cutting its military alliances, but he stressed that the country would follow an independent foreign policy.

Mr. Duterte said early on Tuesday night that he was not anti-American and would not sever military ties with the United States. “Who am I to abrogate a treaty?” he said as he addressed troops.

He made the statements a day after he said he wanted American soldiers out of Mindanao as they were in danger of being targeted by Moro extremists in the area. This came on the heels of his tirade against the United States, one of the Philippines’ closest and longest allies, for daring to try to discuss human rights concerns with him stemming from the extrajudicial killings under his administration.

The US Embassy in Manila on Tuesday said it was still clarifying Mr. Duterte’s call for the withdrawal of US special troops from Mindanao.

“We are currently seeking clarification,” Molly Koscina, an embassy spokesperson, told the Inquirer by e-mail. It withheld further comment on the matter.

Mr. Duterte’s call appears to have not been officially communicated with Washington yet.

John Kirby, a US Department of State spokesperson, earlier said he was not aware of any official communication from Malacañang on the withdrawal of US troops in Mindanao, mostly based in Zamboanga City.

There are 107 US soldiers, all based in the Western Mindanao Command (Wesmincom) in Zamboanga City, according to Col. Edgard Arevalo, chief of the Armed Forces of the Philippines’ public affairs office.

The US forces in Zamboanga are providing technical assistance to local policemen and soldiers and training them on counterterrorism and intelligence gathering.

The US Department of State said America remained committed to its long-standing alliance with the Philippines in many areas, including the fight against terrorism.

“More critically, we’re going to remain committed to our alliance commitments in the Philippines and to that country,” Kirby said in his regular briefing in Washington. A copy of the transcript was posted on the US Department of State website.

Malacañang on Tuesday said the administration was not yet kicking out American troops from Mindanao and was just warning them of the dangers of staying on the island and indicating the possible direction that the government may take in the future.

Mr. Duterte’s statements are more of an “injunction, like a warning,” said his spokesperson, Ernesto Abella.

Defense Secretary Delfin Lorenzana echoed Malacañang’s line that the remarks were taken out of context by the media, saying the President was merely concerned about the safety of the US soldiers.

Abella said in a press briefing that Mr. Duterte’s statements “are not policy set in stone. OK? Not policy yet. But these are backgrounders for possible future action.”

At the moment, he said there was no specific directive as to how the President’s words would be effected.

“We’re not turning our back on anybody. We’re just simply charting an independent course,” he said.

The President’s statements that American soldiers would become targets in Mindanao were intended to provide the context of the conflict with Moros in the area, he said.

The Moros see Americans as “perpetrators of a wrong that has not been redressed,” which was why their “historical and cultural wound” remains, Abella said.

“This is the context of that statement: that the real reason why there is conflict in Mindanao is because Muslims do not trust lowland Filipinos and lowland Christians because of their implicit connection with the Americans who have not decided in any way at all, as far as their perception is, to redress, to address or atone for the past wrongs,” he said.

Abella described this as a “lingering skeleton” that removes the moral ascendancy of those who criticize the Philippines over extrajudicial killings. “So, in a sense, what he’s saying is he’s really—this skeleton in the closet erodes at the moral ascendancy of anybody who has not sufficiently addressed their own faults,” he said.

Kirby said the United States and the Philippines “have a long, productive history,” but admitted that historical ties of both countries is flawed with “past troubles.”

He said Mr. Duterte’s statements could not be taken as official request for the withdrawal of US forces in Mindanao. “I’ve seen the comments. I’ve seen them in press reporting and what I can tell you is that we’re not aware of any official communication by the Philippine government to that effect and to seek that result.”

Kirby said the long-standing security alliance between the United States and the Philippines had stood strong in the past 70 years under the umbrella agreement of the US-Philippines Mutual Defense Treaty.

“I don’t think it’s wise to try to make defense relationship decisions based on press reporting of comments,” said the US state department’s spokesperson.

In an effort to mend fences with the Philippines’ staunch security and political ally, Foreign Secretary Perfecto Yasay Jr. flew to the United States on Tuesday night to meet with US officials in Washington.

However, Charles Jose, spokesperson of the Department of Foreign Affairs, said the secretary would attend the United Nations General Assembly in New York.

Diplomatic sources said Yasay was expected to seek a meeting with officials of the US Department of State to explain Mr. Duterte’s comments on the withdrawal of US forces.

Koscina, the US Embassy spokesperson, said her office had not been officially contacted by Philippine authorities regarding Mr. Duterte’s statements on US forces withdrawal.

“We continue to focus on our broad relationship with the Philippines, and will work together in the many areas of mutual interest, including counterterrorism, to improve the livelihoods of the Philippine people and uphold our shared democratic values,” Koscina said in a text message.

The AFP said only a “token” number of American troops would be impacted by the withdrawal and broader military program were intact.

In Zamboanga City, officials said the presence of American soldiers in the city was not that strongly felt.

Rep. Celso Lobregat said that during the Balikatan and Bayanihan days, the United States sent troops numbering between 400 and 500 to the city, “but there was no impact to us.”

“They did not leave the camp and they did not buy food here, their food came all way from the United States,” Lobregat said.

The Balikatan lasted until 2002 in Basilan province. In March of 2003, it shifted to Sulu province.

Over the years, American soldiers have isolated themselves within the compounds of the Wesmincom in Zamboanga City.

American soldiers continue to make themselves scarce from public eye and they no longer wear uniforms, except during major military events inside the camp.

They were also spotted paying homage to the 15 fallen members of the 35th Infantry Battalion inside the gymnasium during the visit of the President on Aug. 31. With reports from Cynthia D. Balana in Manila; and Jeoffrey Maitem and Julie Alipala, Inquirer Mindanao