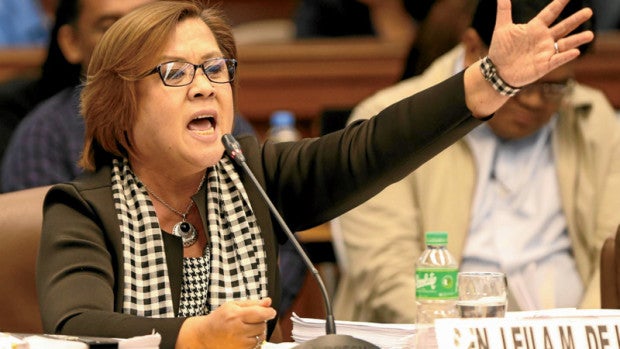 MANILA, Philippines—An incredulous Sen. Leila De Lima on Thursday raised caution over Sen. Richard Gordon’s proposal to suspend the writ of habeas corpus to boost the campaign against drugs and terrorism as she vowed to oppose the move once formally brought to the Senate floor.

“What are we having here? A creeping martial law? A creeping authoritarianism?” said De Lima, among the chamber’s most vocal human rights advocates.

“I am in disbelief at the moment that somebody would have such a plan to file a resolution for the suspension of the privilege writ of habeas corpus. Is it not enough that now, we have a declaration of national emergency on the account of lawless violence?” she told reporters.

President Rodrigo Duterte’s declaration of an indefinite state of lawlessness nationwide, announced after the Davao City bombing last Sept. 2, allows the Commander-in-Chief to call on the military to support law enforcement operations primarily carried out by the police.

“Let’s see first what will be the result of this declaration of national emergency on account of a lawless violence—how they are going to implement it. It might already be effective and [there would be no] need to suspend the privilege of the writ of habeas corpus, because that is like martial law,” she said.

Gordon earlier said that he would file a bill seeking to grant Duterte the authority to suspend the privilege of the writ of habeas corpus, a legal protection against warrantless and unlawful arrest.

De Lima said suspending the privilege would allow authorities to arrest anybody without warrant and may pave the way for prolonged periods of detention without charges.

This led to the illegal detention, torture, disappearance and killing of thousands of perceived enemies of the state during the nearly 14-year martial rule of late dictator Ferdinand Marcos.

“These are extreme measures… That was why the drafters of our Constitution were very careful. They limited the grounds (upon which the privilege could be suspended),” she said.

“As a matter of principle, as a matter of constitutional law, and given what is happening now, that is scary,” she said.

She said the drug war may not be invoked as a ground for suspending the privilege as it is “not really an invasion or rebellion” as contemplated in the Constitution.

Article VII, Section 18 of the Constitution, the same provision that Duterte had invoked in placing the country under a state of lawlessness, allows the President to suspend the privilege of the writ of habeas corpus for not more than 60 days, “in case of invasion or rebellion, when the public safety requires it.”

“We should not take the analogy too far as to think that the drug war is a literal war between armed combatants dedicated to waging said war, and treat drug lords and pushers as foreign invaders or rebels out to overthrow government,” she said.

Asked if she is ready to fight the measure on the Senate floor, De Lima said: “Absolutely.” RAM/rga