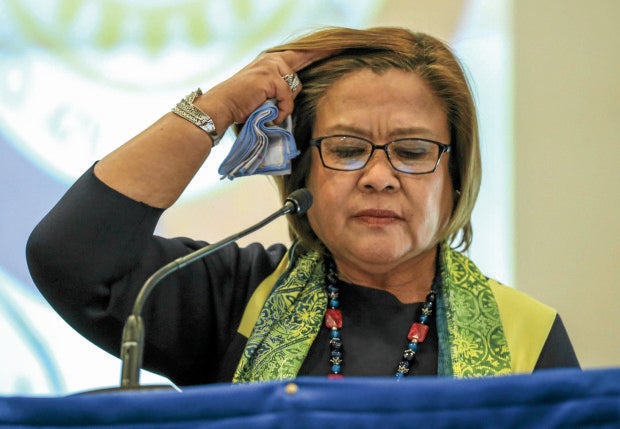 Noting that the privilege of the writ can be suspended only in cases of rebellion and invasion, De Lima warned that Gordon’s proposal would “effectively legitimize” situations of warrantless arrests and prolonged detention without due process.

“The drug war is not really an invasion or rebellion. Using ‘war’ to describe the anti-drug campaign is just a figure of speech. We should not take the analogy too far as to think that the drug war is a literal war between armed combatants dedicated to waging said war, and treat drug lords and pushers as foreign invaders or rebels out to overthrow government. They are not,” De Lima said in a statement.

Gordon’s proposal came after Duterte’s declaration of a state of national emergency on account of lawless violence in the wake of the deadly bombing in Davao City last week, saying the President’s proclamation would not be sufficient to address the problem of terrorism and illegal drugs.

Duterte’s proclamation raised fears of a shift to martial rule, but Malacañang said it would simply empower the President to order the military to support the police in law enforcement duties.

However, De Lima said suspending the writ of habeas corpus, which requires the State to produce the body of a person in its custody before the court, would “basically suspend the proscription against warrantless arrests as enshrined in the bill of rights.”

“The only limitation thus to warrantless arrests when the privilege of the writ is suspended is that the arrest effected must be related to the offenses of rebellion and invasion and the person arrested for rebellion or invasion, or any offense related to such must be formally charged in court within three days after his arrest,” she added.

Gordon said his proposal would come in the form of a bill which will be filed next week. RAM/rga