Most humpback whales taken off the endangered species list 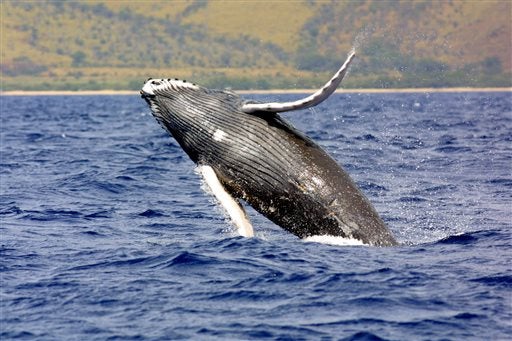 A humpback whale jumps out of the waters off Hawaii. AP/NOAA Fisheries

WASHINGTON, United States — Most populations of humpback whales are no longer on the US endangered species list thanks to international conservation efforts, the National Oceanic and Atmospheric Administration announced Tuesday.

Four decades of national and international initiatives to protect and conserve the marine mammals have helped nine of 14 humpback population segments rebound from historically low levels.

Today’s news is a true ecological success story,” said Eileen Sobeck, assistant NOAA administrator for fisheries. “Whales, including the humpback, serve an important role in our marine environment. Separately managing humpback whale populations that are largely independent of each other allows us to tailor conservation approaches for each population.”

After commercial whaling severely reduced populations, the US listed all humpback whales as endangered in 1970. Today just four whale groups remain on that list, and one is now listed as threatened.

The International Whaling Commission’s whaling moratorium imposed in 1982 — which remains in effect — played a crucial part in the comeback, NOAA said.

The US Marine Mammal Protection Act that protects all marine mammals within US waters still applies to all whales, regardless of endangered status.

Two of the four groups still considered endangered can be found in US waters at some times of the year.

The Central American population looks for food in the Pacific off the US west coast, while the group in the northwest Pacific spends time in the Bering Sea and near the Aleutian Islands.

The humpback group from Mexico now listed as threatened regularly goes to the west coast of the continental United States and Alaska.

In 2010 NOAA launched an extensive review of the status of humpback whales that resulted in the reclassification of the species into 14 distinct populations.

In 2015 NOAA proposed to remove 10 of those 14 groups off the endangered list and gave the public 90 days to comment on the proposed change before finalizing its decision.