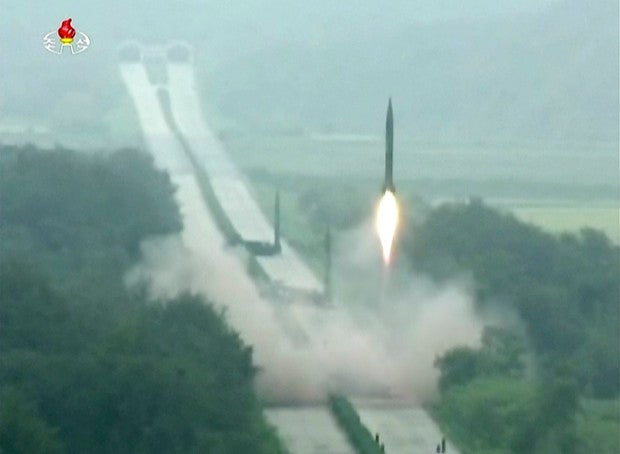 In this undated image made from video distributed on Tuesday, Sept. 6, 2016, by North Korean broadcaster KRT, a missile is launched during a drill at an undisclosed location in North Korea. North Korea on Monday, Sept. 5, 2016, fired three medium-range missiles that traveled about 1,000 kilometers (620 miles) and landed near Japan in an apparent show of force timed to coincide with the G-20 economic summit in China, South Korean officials said. AP

North Korea test-fired three ballistic missiles Monday as world powers gathered for a G20 meeting in China, with leader Kim Jong-Un hailing the tests as “perfect,” and US President Barack Obama warning it would only up the pressure.

“These launches are in grave violation of the Democratic People’s Republic of Korea’s international obligations and UN Security Council resolutions,” the 15-member Council said in a statement.

It called on North Korea to “refrain from further actions, including nuclear tests, in violation of the relevant Security Council resolutions and comply fully with its obligations under these resolutions.”

The council said it would “continue to closely monitor the situation and take further significant measures” if merited and called on all sides to work to reduce tensions.

The document was adopted unanimously, including by Pyongyang’s only ally China.

Earlier, the envoys from Japan, South Korea and the United States appeared before the press together to slam North Korea’s missile program.

“With each test, each violation of UN Security Council resolutions — and there have been 22 of them so far this year — the DPRK demonstrates further advancement of its ballistic program,” US envoy Samantha Power said.

“The Security Council must remain unequivocal and united in its condemnation of these tests.”

UN resolutions bar North Korea from any use of ballistic missile technology.

Pyongyang has nevertheless conducted a fourth nuclear test and a series of missile tests this year in defiance of UN sanctions, prompting South Korea to announce plans to deploy a US anti-missile system to counter such threats.

Earlier Tuesday, Obama held talks with South Korean counterpart Park Geun-hye on the sidelines of a regional summit in Laos.

“North Korea needs to know that provocations will only invite more pressure and further deepen its isolation,” he told reporters after meeting Park in Vientiane.

Park described the launches as a “reckless provocation (that) will lead North Korea down the path of self-destruction.”

But despite the global chorus of disapproval and tough sanctions, Pyongyang is unrepentant — continuing to ignore the international community’s calls for a halt to its weapons program.

“He stressed the need to continue making miraculous achievements in bolstering up the nuclear force one after another in this historic year,” the report added.

The North’s top newspaper Rodong Sinmun carried nine photos of the test, including one of a beaming Kim standing in front of a map surrounded by smiling officials.

South Korea’s defense ministry said the tests were of Rodong missiles with a range of 1,000 kilometers (620 miles). It said they had been fired over the Sea of Japan (East Sea) without warning.

The Rodong is a scaled-up Scud variant with a maximum range of around 1,300 kilometers, bringing most of Japan within range.

Melissa Hanham, an expert on North Korea’s weapons program at the Middlebury Institute of International Studies in California, said it was difficult to determine so far if there had been any technical progress.

“The most obvious difference from the last test is the change in warhead,” Hanham said.

That flew 500 kilometers towards Japan, far exceeding the range of the country’s previous sub-launched missiles.

Kim described the August test as the “greatest success” and said it put the US mainland within striking range.

But the UN Security Council said it regretted that Pyongyang was “diverting resources to the pursuit of ballistic missiles while… citizens have great unmet needs.”

The launch was widely condemned by the US and other major powers, but analysts saw it as a clear step forward for North Korea’s nuclear strike ambitions.

A proven submarine-launched ballistic missile system would allow deployment far beyond the Korean peninsula and a “second-strike” capability in the event of an attack on the North’s military bases.

After his meeting with Park, Obama said if North Korea committed to denuclearization then the “opportunities for us to dialogue with them are there.”

But he added that Pyongyang’s current behavior made that impossible.