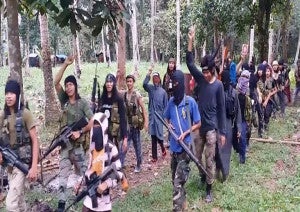 ZAMBOANGA CITY – The Abu Sayyaf will not wait for soldiers to assault its positions in Sulu and will initiate clashes with the military while rallying Tausugs to supports its “jihad.”

Abu Sayyaf spokesperson Alhabsi Misaya said in text messages on Thursday, that “by September 1, the Abu Sayyaf and soldiers of (President Rodrigo) Duterte will test each other in a liberation.”

Misaya, who is under Radulan Sahiron, called the looming battles with government soldiers “the last war of Patikul to the finish.”

“If they are given courage, this war is more fierce than in Zamboanga,” Misaya wrote in one of the text messages that were also sent to the Philippine Daily Inquirer.

He said that if soldiers would not attack them, they would “initiate the attack against soldiers of Duterte.”

Lieutenant General Mayoralgo dela Cruz, the chief of the Western Mindanao Command based here, said he also got hold of a similar text message.

But he said that the military has always treated any information from the Abu Sayyaf with a grain of salt.

“This message is part of their warfare, whether true or not, we have prepared for it,” he said, adding that he doubted Misaya’s figure of 1,000 Abu Sayyaf combatants as the bandits’ numbered only between 200 and 250.

Dela Cruz added the military would be glad to see Abu Sayyaf attacking. “It’s better to be this way, so that we will no longer be hunting them.”

“(A)nd I even suggest that they look for a place (where the battle would take place) so it will no longer be difficult for us to locate them,” Dela Cruz added.

While not specifying the number of troops currently in Sulu, Dela Cruz said more war logistics have been sent to the island-province.

The military now maintains two brigades of soldiers – or the equivalent of six battalions – in Sulu.

“The Abu Sayyaf is recruiting members and they can easily convince drug addicts to join them, just give them shabu and some pocket money.  These (drugs and pocket money) entice them to join Abu Sayyaf,” he said.

Dela Cruz said soldiers had told their superiors of bandits with amazing stamina and aggression, even when wounded. 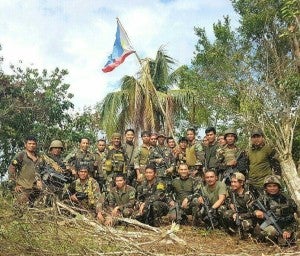 Army Scout Rangers hoist the Philippine flag after gaining control of one of the defensive positions of Abu Sayyaf in Basilan. The military offensives against the terror group continue. CONTRIBUTED PHOTO

“Even when they were seriously wounded, they continued getting closer to the troops. They kept on advancing even if they were hit,” he said.

“It’s an indication that these bandits are into drugs,” he said.

The Abu Sayyaf has lost 36 of its men, Dela Cruz said.

“They have been retaliating,” he said, adding that the clashes have spread to the barangays (villages) of Bakung, Maligay, Tugas, Latih and Bungkaong.