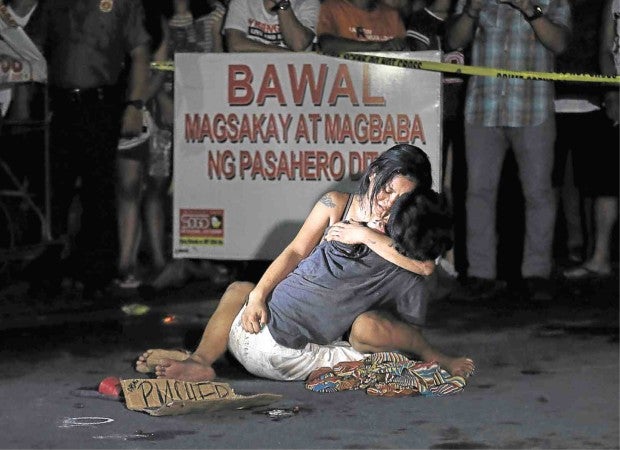 LAMENTATION A weeping Jennelyn Olaires hugs partner Michael Siaron, 30, a pedicab driver and alleged drug pusher, who was shot and killed by motorcycle-riding gunmen near Pasay Rotonda on Edsa. He was one of six killed in drug-related incidents in Pasay and Manila yesterday. RAFFY LERMA/INQUIRER FILE PHOTO

This was how a Catholic Church official depicted the spate of killings under the Duterte administration.

In an interview with Radyo Veritas, Novaliches Bishop Emeritus Teodoro Bacani lamented that Filipinos may now get used to the summary executions because of their high incidence since President Rodrigo Duterte was sworn into office.

(The Filipino greeting of “Mabuhay” (long live) may now be replaced by “Mamatay” (die). The killings have become so widespread which I do not think has happened here even during the Second World War and the martial law era, especially because they are taking place at the time of peace and not during war time.)

He also appealed to the conscience of the authorities and other individuals to refrain from killing drug suspects.

(The whole world including the United Nations has taken notice (of the killings). I appeal to the conscience of those behind the executions, as (what the Lord’s command) says, “though shall not kill.” It’s understandable if it’s for self- defense, but if a person is not out to kill you, then do not kill that person just like that.)

The Philippine National Police on Tuesday said that 895 drug pushers have been killed from July 1 to August 30. Alfred Bayle/IDL