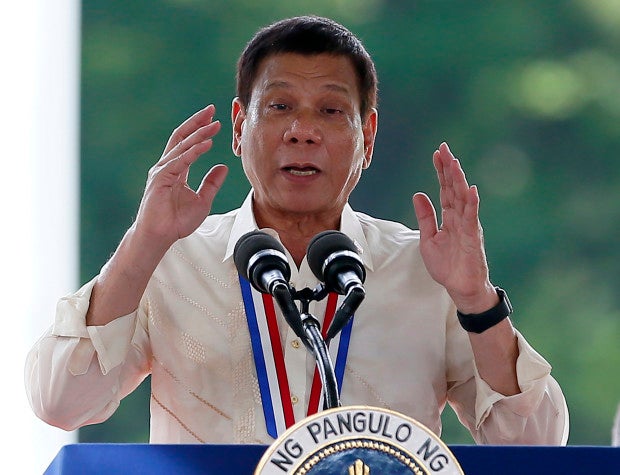 Philippine President Rodrigo Duterte gestures while addressing guests following a wreath-laying ceremony in observance of National Heroes Day, Monday, Aug. 29, 2016 at the Heroes Cemetery in suburban Taguig city, east of Manila, Philippines. In his address, Duterte announced a 2 million pesos ($43,000) bounty for each police officer who are protecting drug lords in his unrelenting anti-illegal drugs campaign that saw close to 2,000 killed since he took office June 30. (AP Photo/Bullit Marquez)

PRESIDENT Duterte said on Monday that the bloody antidrug campaign, that has left nearly 1,800 people dead, did not amount to genocide, but he nevertheless assured the policemen he was ready to go to jail to defend them from lawsuits.

Mr. Duterte drew a line between the widespread killings sparked by his antidrug war and the brutality under Syrian President Bashar Assad and the atrocities committed by the Islamic State (IS) terrorist group.

“Genocide? Who did I kill? I did not kill any child. I did not drop barrel (bombs) just like Assad,” the President said in a speech to mark National Heroes’ Day before war veterans, ambassadors and top officials. “I’m fighting … criminals.”

Referring to IS militants, whom he called “idiots,” he said, “I do not burn women because they refuse to have sex.”

At least 1,779 drug suspects have been killed in his campaign, including 712 who were gunned down in clashes with police, with the rest being slain in unclear circumstances, Philippine National Police Director General Ronald dela Rosa told a Senate inquiry last week.

At least 3.7 million Filipinos have become addicted to methamphetamines, known locally as “shabu,” with about 600,000 drug users and dealers surrendering to authorities, the President said.

Human rights groups have expressed alarm over the spate of killings, and UN-appointed human rights experts have said steps should be taken to halt the violence, adding that the government and law enforcers could be held responsible.

“Claims to fight the illicit drug trade do not absolve the government from its international legal obligations and do not shield state actors or others from responsibility for illegal killings,” the UN special rapporteur on summary executions, Agnés Callamard, said in a statement this month.

Mr. Duterte built a name with his deadly crime-busting style as a longtime mayor of Davao City. He described his campaign against drugs as a harsh war that would involve the military because the problem had worsened into a crisis and claimed the lives of law enforcers. AP