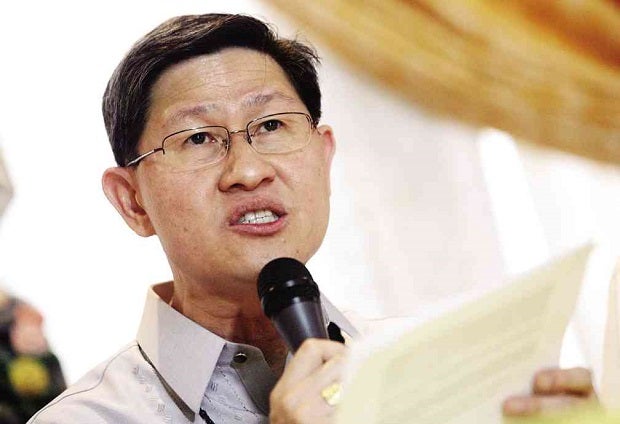 MANILA Archbishop Luis Antonio Cardinal Tagle has called on Filipinos to value the sanctity of life, not just by condemning extrajudicial killings but all forms such as abortion and unfair labor practices.

In an interview on Sunday on Church-run Radio Veritas, Tagle stressed that all forms of killings should be denounced.

“Many are worried about extrajudicial killings, it’s only right. But I hope we should be worried too about abortion, why are few speaking out on it, that’s also killing. Unfair labor practice is also killing the dignity of the worker,” Tagle said.

The archbishop broke his silence on the issue amidst the deaths of more than 700 people in police operations and 1,000 more in summary executions since President Duterte assumed office.

Tagle stressed that another form of killing was wasting food, forcing poor people to pick it in the trash and feed it to their families. “That is also killing children who have nothing to eat,” he said.

He added that each and every life should be held sacred.

“I know the killings are a big issue now. Guilty or not, life should be taken care of and respected. And if one is guilty, he should be given a chance to change,” Tagle said.

Other bishops and Church groups have condemned the extrajudicial killings, but the Catholic Bishops’ Conference of the Philippines has not issued a collective statement.

Tagle pointed out the need to be consistent in promoting life, and that one should not be selective in doing so.

“Let’s keep an eye on the abortion of unborn children, on selling illegal drugs. That is a way to kill the youth’s dreams, minds, their relationship with their children,” he said. Julie M. Aurelio

Read Next
After raid, ARMM gov seeks transfer of high-risk inmates
EDITORS' PICK
Look Through: Super Typhoon Karding barrels through parts of Philippines
Motorcycles, smartphones, and cash prizes up for grabs in TNT’s ‘Tuloy Ang Saya’ Raffle in Mindanao
Do all the things you do, faster
POGOs not linked to Illegal online gaming, says Pagcor
House energy committee chair Arroyo bats for cheap electricity
Metro Manila now at moderate risk for COVID-19 — DOH
MOST READ
Robredo supporter tackles elephant in room: No massive fraud in 2022 polls, surveys were just right
Comelec invalidates win of sitting governor in Negros Oriental
DepEd: We are in a crisis situation in education sector
Lives destroyed as armyworms invade Philippine ‘onion capital’
Don't miss out on the latest news and information.