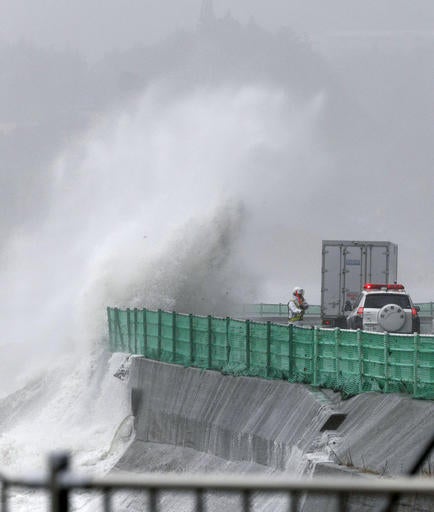 TOKYO — A typhoon slammed into northern Japan on Tuesday evening, threatening to bring floods to an area still recovering from the 2011 tsunami.

Typhoon Lionrock made landfall near the city of Ofunato, about 500 kilometers (310 miles) northeast of Tokyo. It’s the first time a typhoon has made landfall in the northern region since 1951, when the Japan Meteorological Agency started keeping statistics.

Even before it made landfall, the storm had already paralyzed traffic, caused blackouts and prompted officials to urge residents to evacuate. It was packing winds up to 126 kilometers (78 miles) per hour Tuesday evening.

More than 170,000 people were subject to evacuation, including 38,000 in Ofunato, though only some of them actually went to shelters. More than 10,000 homes in the northern region were without electricity, with power lines damaged from the winds.

The March 2011 earthquake and tsunami left more than 18,000 people dead in the wide swaths of Japan’s northern coast, including 340 in Ofunato.

As of Tuesday evening, Typhoon Lionrock had brought 15 centimeters (6 inches) of rainfall to the region over the past 24 hours, and was expected to dump up to 8 centimeters (3 inches) of rain per hour in some areas, the meteorological agency said, urging residents to use caution and stay away from the coastline.

Major airlines canceled more than 100 flights to and from the northern region. Bullet train services in the Tohoku and Hokkaido regions were suspended.

At the Fukushima nuclear power plant, decimated by the 2011 disaster, some outdoor decommissioning work was suspended as a precaution. TVJ