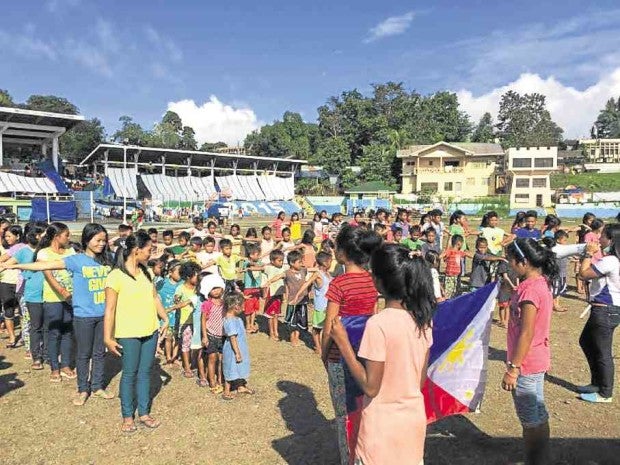 DAVAO CITY—More than 3,000 Manobo “lumad” evacuees, who have been staying at the sports complex in Tandag City in Surigao del Sur province, are planning to return to their homes in Lianga town on Sept. 2.

Their homecoming will happen exactly a year and a day after they were forced to leave their communities when members of the paramilitary group Magahat-Bagani killed three lumad leaders in the village of Diatagon town on Sept. 1 last year.

But Michelle Campos, daughter of one of those killed, said government soldiers are still in their villages. “We want them out of our villages before we return home,” she said on Sunday.

Campos’ father, Dionel, and lumad leaders Emerito Samarca, administrator of the Alternative Learning Center for Agriculture and Livelihood Development (Alcadev), and Juvello “Bello” Sinzo were shot and killed by Magahat-Bagani militiamen in the upland community of Sitio (subvillage) Han-ayan.

Dionel was the chair of Malahutayong Pakigbisog sa mga Sumusunod (Persevering Struggle for the Next Generation) or Mapasu, an indigenous peoples’ organization opposed to the entry of logging and mining companies in Lianga, but which the military has branded as a communist front.

Almost a year after the killings, no suspect had been arrested, even as the government dangled a P3.6-million bounty for the heads of suspected militia leaders Bobby and Loloy Tejero and Margarito Layno.

Campos, in a telephone interview, said they still want the Magahat-Bagani disbanded, and those behind the killings arrested.

“Soldiers also have to leave our communities. We need to go home,” she said.

On Aug. 24, representatives of the provincial government inspected 11 communities abandoned by the evacuees.

“Our hearts were crushed upon seeing our houses damaged, our once productive farms covered with weeds and our schools rendered unusable,” Mapasu said in a statement.

“We saw 10 houses burned to the ground. There were houses with walls, roofs and floors dismantled and used as firewood. In some houses, belongings were scattered, destroyed and stolen. Most of the houses were damaged, having been left unused because of our forcible evacuation,” the group added.

Six other schools for lumad children were also damaged.

Mapasu said members of the group that visited the site on Aug. 24 were “enraged upon seeing the large military camps in our communities in Kilometer 9 and Han-ayan.”