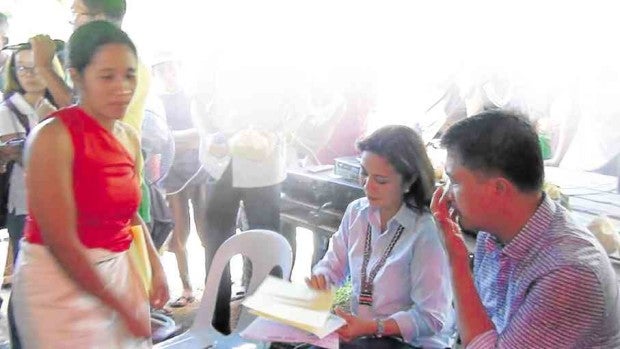 POLA, Oriental Mindoro—Her attention drawn to  sheets of paper given to her by Mangyan leader Ahop Agate, Vice President Leni Robredo browsed through each note, which she called “love letter,” prepared by members of the indigenous community here so they can convey their wish list for their villages.

Robredo, on Friday, visited Mangyan folk in Sitio Nagkakaisa in Barangay Tiguihan, in one of her “laylayan” (fringes) journeys, where she visits the country’s poorest communities. Robredo’s trip was part of a campaign promise and advocacy to visit far-flung areas to bring the government closer to poor Filipinos.

After a helicopter ride to this town, she walked through a 750-meter concrete uphill farm road that goes through a housing project of the Department of Social Welfare and Development. The site has more than 20 houses.

The trek led to a tent where Mangyan, from the subtribe of Tadyawan, representing some 80 families, waited.

“We understand that the Vice President can’t stay longer [so they wrote her letters],” he said.

Robredo promised that when she and her team reaches Metro Manila, they will study the community’s needs, as outlined in the letters. Among the requests they made was electricity supply.

She promised to seek help to address the Mangyan’s needs, adding they will “definitely not be made to wait for nothing.”

Robredo said representatives from the United Nations Children’s Emergency Fund and United Laboratories are interested in helping provide some of the community’s needs.

Her group, accompanied by Gov. Alfonso Umali Jr., went to the new public market in the town center to grace its inauguration.

“I came supposedly to give inspiration, but I go back to Manila bringing your inspiration, that what appears to be impossible becomes possible with people helping each other and in gentle ways,” she said.