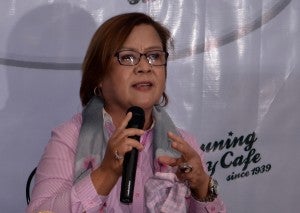 DAGUPAN CITY, Pangasinan –Senator Leila de Lima visited on Sunday (Aug. 28), the wake of the five-year-old girl killed last week by a gunman who was allegedly out to kill the child’s grandfather.

“She prayed in front of the coffin, then asked me for details of what happened on the day (Danica was killed),” Garcia said.

“When I asked her to help find justice for my granddaughter, she promised to help,” she said.

Garcia said De Lima refused to have her photograph taken with the family members and neighbors, and did not grant an interview request from a local TV reporter.

De Lima was escorted to the area by police officers manning the community precinct in Mayombo, the village where the Garcias reside.

Garcia’s husband Maximo, the target of the gunman, was shot and wounded and was still being treated for a stomach injury, as of Sunday.

Four days before the attack, he surrendered to the police in order to clear his name, after being told that he was on a police drug watch list.

The police identified Bryan Macaayao as the gunman, and have filed murder and frustrated murder cases against him. The same charges were also filed against an unidentified accomplice who drove the motorcycle they used to flee the crime scene.

Senator Leila de Lima has been heading a Senate inquiry into the spate of drug-related killings that have gripped the nation since President Duterte ordered his policemen to wage a war against illegal drugs.  De Lima suspects that rogue cops involved in illegal drugs have been summarily executing drug pushing suspects who could turn witness against them.

President Duterte, thinking De Lima has unfairly tainted the entire Philippine National Police’s campaign against illegal drugs, has alleged that De Lima accepted drug protection money when she was Department of Justice secretary and had jurisdiction over the New Bilibid Prison, where criminals were believed to be directing drug trafficking operations. SFM