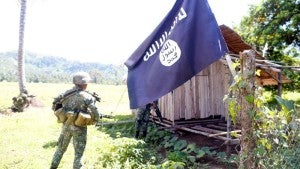 Prison guards at the Lanao del Sur provincial jail here said it took only 10 minutes for armed men to free 23 inmates, eight of whom were tagged as members of a local terror group.

The jail’s officer of the day, Johary Panaarag, in his written report said the raid started when two women arrived, claiming they were bringing food to inmates, at around 5 p.m. Saturday.

When the women were allowed inside the jail gates, at least 50 armed men suddenly showed up.

The armed men then ordered the jail guards to lie on the ground as they walked to the cells some 50 meters away.

“We were not able to fight back. Some of us were handcuffed. They threatened to kill us if we resisted,” prison guard Tongco Abdullah told the Philippine Daily Inquirer.

Some of the 12 prison guards on duty during the raid were armed with M16 Armalite rifles.

Then, the suspects looked for their target– eight (five men and three women) suspected members of the Maute group. They then destroyed the cell’s padlocks and freed the inmates.

A prisoner, who asked not to be named, said the jail guards did not show resistance.

Along with the eight jailed members of the Maute group, 15 other inmates escaped.

But one inmate, Blah Masorong, said he decided not to escape from prison even if he had the chance.

“I did not join them because I am due for release,” Masorong told the Inquirer.

The armed men, along with the escapees and a prison guard they held hostage, moved toward Barangay Calocan near Lake Lanao onboard four get-away vehicles, including a truck owned by the Bureau of Jail Management and Penology (BJMP). There, they released the unidentified prison guard. The armed men then boarded motorboats and escaped, while the other prisoners fled on foot.

The eight prisoners are believed to be members of the Maute group, a local terrorist cell that has been styling itself as an ISIS affiliate. They were arrested at a military checkpoint in Lumbayanague town in Lanao del Sur on August 22.

The military said it confiscated from the eight suspects a firearm, a grenade, an 81mm mortar and bomb-making components.

On July 29, government soldiers also intercepted a vehicle loaded with improvised explosive devices and other bomb-making components. Based on the vehicle’s registration, it was owned by a member of the Maute family – whose other members were being hunted down because of involvement in various atrocities in Lanao del Sur, including the beheading of two sawmill workers in April in Butig town.

The group being led by Maute family members, which had reportedly pledged allegiance to the Islamic State, was also suspected of staging the July 27 attack on the headquarters of the Army’s 103rd Infantry Brigade in Marawi.

In Cagayan de Oro City, the regional police command in Northern Mindanao has ordered all police units to strengthen and intensify its intelligence monitoring following the escape of the 23 inmates.

Constantino has instructed police on the ground to conduct checkpoints to constrict entry of terror groups in Northern Mindanao.

Constantino has reminded the public to be extra vigilant. (With a report from Jigger J. Jerusalem, Inquirer Mindanao)  SFM

Read Next
Public ads vs drug use to be shown on TV, in 300 cinemas
EDITORS' PICK
House energy committee chair Arroyo bats for cheap electricity
Why Tagle is a leading papal contender
A laptop that maximizes your WiFi so you can maximize your productivity
PH resumes talks with China on Chinese-funded transport projects
Powered by style, innovation and passion
In Borongan, nuns play hoops (not mahjong)
MOST READ
Why Tagle is a leading papal contender
Iza Calzado asked self upon learning she’s pregnant at 40: ‘Is this what I want?’
Zubiri on SRA mess: Shameful, disgusting
Arjo Atayde reveals proposal to Maine Mendoza was ‘more than a year’ in the making
Don't miss out on the latest news and information.

newsinfo
House energy committee chair Arroyo bats for cheap electricity
newsinfo
Why Tagle is a leading papal contender
technology
A laptop that maximizes your WiFi so you can maximize your productivity
newsinfo
PH resumes talks with China on Chinese-funded transport projects
technology
Powered by style, innovation and passion
newsinfo
In Borongan, nuns play hoops (not mahjong)
newsinfo
Why Tagle is a leading papal contender
August 14, 2022
entertainment
Iza Calzado asked self upon learning she’s pregnant at 40: ‘Is this what I want?’
August 14, 2022
newsinfo
Zubiri on SRA mess: Shameful, disgusting
August 14, 2022
entertainment
Arjo Atayde reveals proposal to Maine Mendoza was ‘more than a year’ in the making
August 13, 2022
newsinfo
My neighbor FVR: From soldier to president
August 14, 2022
sports
Gilas gets solid core with Clarkson, Sotto planing in
August 14, 2022