‘Junkies are not humans’ 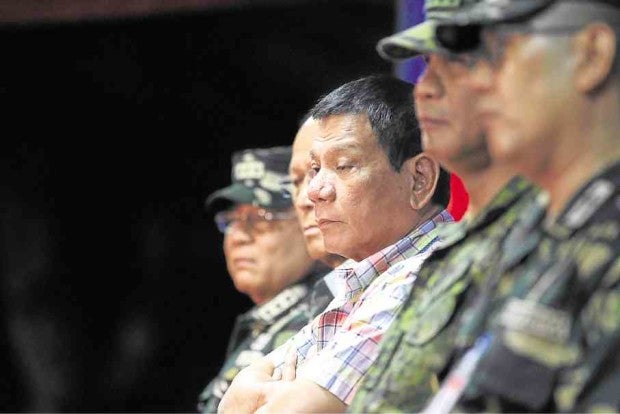 DAVAO CITY, Philippines—Junkies are not humans.

That is how President Rodrigo Duterte sees drug users whose bodies are piling up as he presses his brutal war on drugs.

International human rights groups and the United Nations have raised concern about the killings, but Mr. Duterte, addressing soldiers at a military camp in his hometown Davao City on Friday night, said those groups should review their concept of human rights.

“These human rights (advocates) did not count those who were killed before I became President. The children who were raped and mutilated [by drug users],” he said.

“That’s why I said, ‘[W]hat crime against humanity?’ In the first place, I’d like to be frank with you, are they (drug users) humans? What is your definition of a human being? Tell me,” he said.

Mr. Duterte, 71, was angry at persistent criticism of his bloody crackdown on the illegal drug trade, which he launched right after taking office on June 30, with instructions to police to kill suspects who would resist arrest.

He promised bounties and protection from prosecution for officers who would kill drug lords, drawing criticism from UN special rapporteur on summary executions Agnes Callamard.

“Directives of this nature are irresponsible in the extreme and amount to incitement to violence and killing, a crime under international law,” Callamard said in a statement posted last week on the website of the UN high commissioner for human rights.

“Claims to fight illicit drug trade do not absolve the government from its international legal obligations and do not shield state actors or others from responsibility for illegal killings,” she said.

UN special rapporteur on the right to health Dainius Puras added that the fight against illegal drugs must “respect the human rights of each person.”

The United Nation’s antidrugs office also this month said it was “greatly concerned” by reports of extrajudicial killings in the Philippine government’s war on drugs.

Mr. Duterte, who won May’s presidential election on a promise to kill tens of thousands of criminals and stamp out illegal drugs within six months, refused to back down. He called the United Nations “stupid” and threatened to withdraw the Philippines from the world body.

A former prosecutor and longtime mayor of Davao City, where he was linked to vigilante killings of crime suspects, Mr. Duterte sees criticism of his drug war and calls for an investigation of the extrajudicial killings as interference in Philippine domestic affairs.

In his speech to troops here on Friday night, he said those criticizing his war on drugs should use the concept of human rights “properly in the right context if you have the brains.”

“Now, if your gray matter between the ears is melting, I cannot help you if that’s your understanding,” he said.

The Philippine National Police chief, Director General Ronald “Bato” dela Rosa, told a Senate inquiry last week that 1,946 drug suspects had been killed since the launch of the campaign.

Of those killings, 756 were by police and the rest by other killers and the cases were under investigation, he said.

Police say the other killers could be vigilantes or drug syndicates, whose members are killing each other.

Mr. Duterte argued that the deaths were necessary because a war could not be waged without killing.

He, however, asked the military to make available its camps for the rehabilitation of more than 700,000 drug users who had turned themselves in for fear of ending up dead.

“Give a little space, in the mountain, not here (in the city). You cannot rehabilitate these guys there if they remain (here). You have to isolate them,” Mr. Duterte said.

“And for those that cannot be repaired … these are really the (legally insane). They become dysfunctional,” he said.

Interestingly, Mr. Duterte has never referred to drug users as “victims” who can still recover from addiction, as claimed by individuals and institutions involved in drug rehabilitation programs.

Mr. Duterte claimed that experts from the United States had told him that continued use of shabu (methamphetamine hydrochloride) for one year would “shrink the brain,” putting the users beyond redemption.

He said his critics should understand the extent of the drug problem in the Philippines, where there are 3.7 million people hooked on illegal drugs.

“This is no easy problem,” he said. “This will pull down this country.”

Again, Mr. Duterte lambasted the United Nations and other critics of his war on drugs.

He said the United Nations broke protocols when it issued a statement expressing concern about the killings.

“When I was mayor, you can really criticize me … call me names. But these dimwits forgot that I’m now a President and I represent a country,” Mr. Duterte said.

“Do not go outside to the media and start blabbering your mouth because I represent a sovereign state,” he said.

Mr. Duterte said he did not care about what human rights advocates and experts from the United Nations were saying about his campaign against drugs.

“My business is to protect the people of the Philippines and keep intact the integrity of the republic. That is my solemn and sacred duty,” he said. With a report from AFP/TVJ