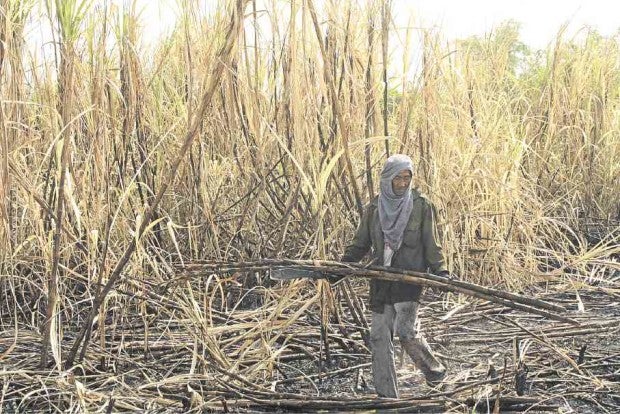 LUISITA HARD WORK A farmer carries the brunt of work in the sugarcane plantations of Hacienda Luisita. Agrarian Reform Secretary Rafael Mariano has given the go-signal to proceed with the distribution of over 300 hectares more of the estate owned by the Cojuangco family. E.I. REYMOND T. OREJAS/CONTRIBUTOR

After eight weeks in office, Agrarian Reform Secretary Rafael Mariano made good on his promise to see to the land reform coverage of Hacienda Luisita, the vast sugar plantation owned by the Cojuangco family of former President Benigno Aquino III in Tarlac province.

The veteran peasant leader on Thursday signed an order to go ahead with the coverage and distribution of 358.22 hectares in Hacienda Luisita registered to the Cojuangcos’ Tarlac Development Corp. (Tadeco) that had been exempted from the Comprehensive Agrarian Reform Program (CARP) under the first Aquino administration.

The 358-hectare Tadeco land, located in Barangays Cutcut and Balete in Tarlac City, was not included in the 4,915 hectares of Hacienda Luisita that the Supreme Court ordered in 2011 distributed to the plantation’s thousands of tenants and workers.

Putting an end to the case that had been pending with the Department of Agrarian Reform (DAR) for the last three years, Mariano denied Tadeco’s argument that the land was no longer agricultural and that the DAR did not properly serve the notices of coverage.

In his order dated Aug. 25, Mariano said the land remained agricultural and that the notices of coverage issued on Dec. 17, 2013—before the CARP law expired on June 30, 2014—were valid.

He directed the DAR provincial office in Tarlac to “immediately proceed” with the land acquisition and distribution process.

He also ordered the DAR regional office to do everything necessary, “including securing assistance from law enforcement officials,” to make sure Tadeco and its representatives complied with the order.

“All the power available to the DAR will be used under [my] term … to protect the rights of farmers. We will make sure no farmer will be displaced from his land,” Mariano said in a news conference.

While Tadeco can file an appeal all the way to the Supreme Court, he said the DAR would proceed with the coverage and distribution of the land, estimated to take about 195 days, from identifying beneficiaries up to issuing certificates of land ownership award (CLOAs) to the farmers.

“We will go ahead with the process. The only thing that can stop us is a TRO (temporary restraining order) from the Supreme Court,” Mariano said.

Agrarian Reform Undersecretary Luis Pañgulayan said during their recent inspection, the Tadeco land remained agricultural but idle since farmers were kept out by a barbed wire fence and armed guards.

“We were not able to enter. The guards had firearms. But we will start to enter the area once we are done with the preliminary activities,” he said.

Mariano, a longtime leader of the militant Kilusang Magbubukid ng Pilipinas and a former party-list congressman, vowed to prioritize the case of Hacienda Luisita when he was appointed by President Duterte.

During the term of her son, President Benigno Aquino III, the Supreme Court on

Nov. 22, 2011, unanimously cleared the distribution of 4,915.75 hectares registered to Hacienda Luisita Inc. that were covered by the stock distribution scheme.

The tribunal also ruled that the Cojuangcos should be compensated based on the 1989 land valuation at P40,000 per hectare.

The DAR said 97 percent of the 4,915 hectares in Hacienda Luisita had already been distributed to more than 6,000 beneficiaries, with the remaining 78 ha to be distributed soon to 111 beneficiaries.

Mariano’s predecessor, Virgilio de los Reyes, who held the DAR post for the last six years, held off covering the Tadeco-registered land and the rest of Hacienda Luisita, which originally had a total area of 6,453 ha.

De los Reyes had said the Tadeco land was not included in the Supreme Court order since it was not registered to Hacienda Luisita Inc., and that the DAR had to determine if the land was no longer agricultural as Tadeco claimed.

Mariano said he would soon release his decision on other pending cases involving Hacienda Luisita, including a 1996 land conversion order that eventually led to the sale of 580 hectares in Hacienda Luisita.

He said the DAR would follow up the Supreme Court’s order to audit the P1.33 billion in proceeds from the land sale to determine the share of farmer beneficiaries who were deprived of owning the land.