ORMOC CITY — Improvised bladed weapons were recovered during a raid in the city jail in Barangay Alta Vista in this city on Thursday morning.

Operation Greyhound was conducted at 6 a.m. by the local police, the Philippine Drug Enforcement Agency (PDEA) and the personnel of the Bureau of Jail and Management and Penology (BJMP).

Chief Insp. Jennifer Joyce Abar, city jail warden, said that aside from improvised weapons, they also found cellular phones and chargers, which were not allowed inside the jail.

She said 434 prisoners were inside the facility, which had a capacity of only 50 inmates.

Abar said the BJMP planned to construct two two-story buildings worth P4 million each inside the compound to solve the problem of congestion.  SFM 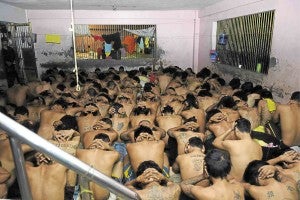