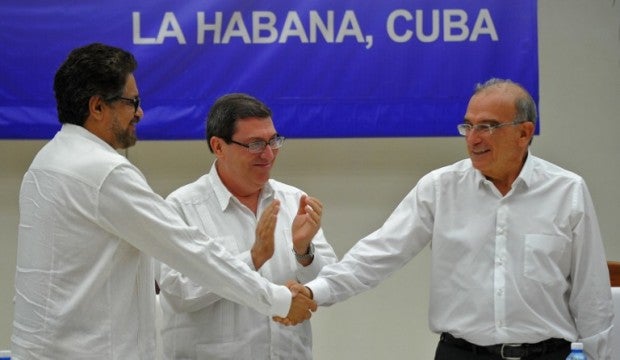 Colombian government head of delegation for peace talks Humberto de la Calle (right) and FARC-EP Commander Ivan Marquez (left) shake hands upon the signing of the agreement at the conclusion of the peace talks in Havana at the Convention Palace in Havana, on August 24, 2016. At center Cuban Foreign Minister Bruno Rodriguez. Colombia’s government and FARC rebels announced Wednesday that they have reached a historic peace accord to end their half-century civil war, the last major armed conflict in the Americas. AFP

HAVANA, Cuba — Colombia’s government and FARC rebels announced Wednesday that they have reached a historic peace accord to end their half-century civil war, the last major armed conflict in the Americas.

After nearly four years of peace talks in Cuba, the two sides said they have successfully concluded negotiations and reached a final deal.

“The Colombian government and the FARC announce that we have reached a final, full and definitive accord… on the end of the conflict and the building of a stable and enduring peace in Colombia,” they said in a joint statement read out in Havana.

“We have fortunately managed to reach a safe harbor,” said the leader of the Revolutionary Armed Forces of Colombia (FARC), Timoleon “Timochenko” Jimenez.

Over the past few days, the government and the FARC had been discussing a range of unresolved topics, and worked late into the night Tuesday to draft a joint statement, sources from the two delegations told AFP in Havana.

Santos smiled as he spoke of a “very special day.”

“May this country that you are imagining and painting become a reality,” he told a group of children taking part in a government-sponsored art competition called “Paint a Colombia in Peace.”

Once a peace deal is signed, the FARC will begin moving its fighters from their jungle and mountain hideouts into disarmament camps set up by the United Nations, which is helping monitor the ceasefire.

The deal must still be endorsed by Colombians in a referendum.

Santos’s top rival, former president Alvaro Uribe, is leading the “No” campaign, arguing his successor has given too much away to the FARC.

Along the way, it has drawn in several leftist rebel groups and right-wing paramilitaries. Drug cartels have also fueled the violence in the world’s largest cocaine-producing country.

Three previous peace processes with the FARC ended in failure.

But after a major offensive by the army from 2006 to 2009 — led by then-defense minister Santos — a weakened FARC agreed to come to the negotiating table.

This time, a final peace accord looks all but certain.

However, the government is still fighting a smaller rebel group, the National Liberation Army (ELN), whose ongoing kidnappings have derailed efforts to open peace negotiations.