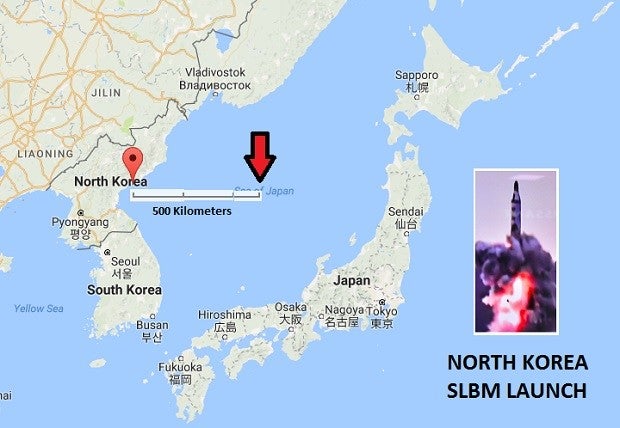 Japan said on Wednesday, August 24, 2016, that North Korea launched a submarine based missile that breached its air defense identification zone and posed a serious threat to its security. The submarine-launched ballistic missile or SLBM was reportedly fired off Sinpo, North Korea, and landed in the Sea of Japan.

The results of Wednesday’s launch proved the North had joined the “front rank of the military powers fully equipped with nuclear attack capability” and that the US mainland and the operational theater in the Pacific were now “within the striking range” of the North’s army, KCNA news agency reported Kim as saying.

Kim saw the launch first hand, KCNA reported, although it was not clear where his alleged observation post was.

A proven SLBM system would take North Korea’s nuclear strike threat to a new level, allowing deployment far beyond the Korean peninsula and a “second-strike” capability in the event of an attack on its military bases.

Kim stressed the need for stepped-up efforts to mount nuclear warheads on all types of ballistic missiles and to develop the means to deliver them in order “to cope with the unpredicted total war and nuclear war with the US imperialists”, KCNA said.

“I do not guess what ridiculous remarks the US and its followers will make about this test-fire, but I can say their rash acts will only precipitate their self-destruction,” Kim was quoted as saying by KCNA.

Kim issued the order for the test-fire, with the submarine rising to a depth suitable for firing and before launching the ballistic missile, the news agency said.

South Korea’s Yonhap news agency cited a military source as saying Wednesday’s launch had been made at an acute angle to limit the missile’s range.

If fired at the optimum angle and fully fuelled, it could fly over 2,500 kms, the source said.

The agency previously quoted a military source saying if fired at the optimum angle it could cover more than 1,000 kms — without mentioning if it was fully fuelled.

The test-launch proved that “the core technical indexes of the ballistic missile” met “all requirements for operation”, KCNA said.

Kim added that the “US vicious nuclear threat and blackmail against the DPRK (North Korea) only resulted in bolstering up its nuclear attack capability hour by hour”, according to KCNA.

The South’s Joint Chief of Staff said in a statement following the launch that the North was clearly bent on escalating tensions and said the SLBM test posed a “serious challenge” to security on the Korean peninsula.

“We will deal strongly and sternly with any provocation by the North,” it said.

The latest test came just days after North Korea threatened a pre-emptive nuclear strike against South Korean and US forces who kicked off their annual “Ulchi Freedom” military drill on Monday.

Seoul and Washington insist such joint exercises are purely defensive in nature, but Pyongyang views them as willfully provocative.

Current UN resolutions prohibit North Korea from any use of ballistic missile technology, but Pyongyang has continued to carry out numerous launches following its fourth nuclear test in January.

South Korea has responded to Pyongyang’s continued launches by agreeing to deploy a sophisticated US anti-missile system — known as THAAD — a move that has seriously strained relations with North Korea’s main diplomatic ally, China.

North Korea has conducted a number of SLBM tests — most recently in April and July — with varying degrees of success.