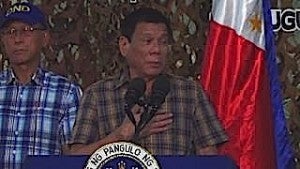 DAVAO CITY – President Duterte on Wednesday night declared a ceasefire with the Communist Party of the Philippines and its armed wing, the New People’s Army.

“I am joining the Communist Party of the Philippines in its desire to seek peace for this nation,” the President said at 11:35 p.m.Wednesday.

Mr. Duterte also ordered the Armed Forces of the Philippines and the Philippine National Police to abide by the ceasefire declaration.

“So we avoid hostile actions against each other. We do not go into antagonistic behavior in front of whoever. As a matter of fact, I am encouraging people in government, the military and the police to be friendly with the forces of the revolutionary government of the Communist Party of the Philippines in the meantime that we have a ceasefire because of the Oslo talks,” the President said.

Mr. Duterte said he hoped that the ceasefire would “go a long, long period for a peaceful resolution of the communist rebellion against the Republic of the Philippines.”

The President said his decision was “mainly based on a consensus and the concurrence of all the commanding generals of the AFP the other day” and of Defense Secretary Delfin Lorenzana.

The President also appealed to the police and military forces not to be hurt with his decision “because as president my main task is to seek the peace for my country.”

“I am not a president who would enjoy waging war against the citizens of this republic. It pains me deeply to see people dying for an ideology na pwede naman nating mapagusapan nang mapayapa (that we can talk over peacefully), just like now,” Mr. Duterte said.

“And I also wondered why we had to kill each other for 45 years only to end up, which is really a significant event for everybody, talking. And to think so many lives (have been) lost in government and the other side, when we can talk,” the President added.

Mr. Duterte said his “regret” for the country was that talks should have been done along time ago.

“That is my plea to everybody — communists, soldiers, police — to understand that there is always a time for everything. We cannot be at war at all times,” he said.  SFM