Philippines hopes for peace deal with rebels within a year 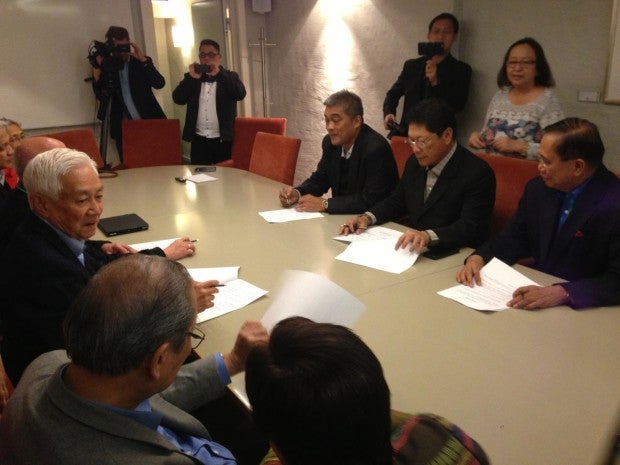 President-elect Rodrigo Duterte’s peace negotiators and the National Democratic Front of the Philippines agreed in Oslo, Norway, to hold formal talks in the third week of July and have listed five items in the agenda for the talks. Facing the camera are the incoming government’s representatives (from left) Hernani Braganza, Silvestre Bello III and Jesus Dureza. (Photo courtesy of NDFP legal consultant Edre Olalia)

OSLO, Norway — The Philippine government said Monday it hoped to reach a peace deal with communist guerrillas within a year, as the two sides kicked off talks in Norway aimed at ending one of Asia’s longest insurgencies.

“On the part of the (government) panel, we have imposed a timeline of nine to 12 months,” Silvestre Bello, the government delegation’s head of negotiations, told reporters.

The government and the rebels hope to breathe new life into the peace process by discussing simultaneously the outstanding issues of social and economic reforms, political and constitutional changes, and an end to hostilities.

Previous peace talks have addressed one issue at a time.

“With this new approach we are quite confident that we will be able to achieve our timetable,” Bello said.

President Rodrigo Duterte, who took office on June 30, has made the resumption of talks with the rebels one of his top priorities.

He has even floated the possibility of forming a coalition government with them.

The head of the rebel delegation, Luis Jalandoni, confirmed the timetable but was more cautious in his optimism about reaching a political settlement after 30 years of failed talks.

“I think we will try to do it in one year but it might take a little more time because the negotiations on social and economic reforms could take more time,” he told AFP.

“It’s more complicated than some may think,” he said.

Established in December 1968, the Communist Party of the Philippines launched a rebellion three months later that has so far claimed the lives of 30,000 people, according to official estimates.

Its armed faction, the New People’s Army (NPA), is now believed to have fewer than 4,000 gunmen, down from a peak of 26,000 in the 1980s, when a bloodless revolt ended the 20-year dictatorship of late President Ferdinand Marcos.

But the movement retains support among the poor in rural areas, and its forces regularly kill police officers or troops while extorting money from local businesses.

There have been many false dawns in the peace process, most recently in 2011 when the previous administration of Benigno Aquino and the communists said following talks they believed peace could be attained in 18 months.

The founder of the Communist Party, Jose Maria Sison, said however that having Duterte as president increased the chances of clinching a peace deal.

“For the first time in the history of the Philippines, a President has emerged by denouncing the abuses of the oligarchy and the folly of servility to foreign powers and by using street language and methods of the mass movement.”

Duterte, who calls himself a socialist, was Sison’s student at university and has close links to the communists. His cabinet secretary is a former rebel leader.

“A new element, which is the Duterte presidency, and the fact that we’re also getting old and we want to finish this in our own lifetime… are all important factors,” he told AFP.

The two sides agreed to ceasefires from Sunday to create a conducive environment for the talks in Oslo.

Some of those rebels flew to Oslo to take part in the negotiations, which are due to wrap up on Friday.

The government responded by saying it would restore a unilateral ceasefire that was declared in July but abruptly withdrawn by Duterte just days later after a rebel ambush.

The government has said its ceasefire will last for as long as necessary to bring peace.

The communists said their own ceasefire would only last until August 27, but a rebel statement said they were willing to discuss a longer truce with Manila.

Norway has been acting as intermediary for the peace process since 2001./rga

Read Next
Olongapo cops nab 5 drug suspects; family surrenders in Isabela
EDITORS' PICK
Smart celebrates all kinds of ‘#SimplyLove’ for Pride Month
WATCH: INQside Look with Fil-Am actress Aina Dumlao
SWS: Over 12M Filipinos still jobless as of May 2021
SANTIS Delicatessen: The road to survival is sweet and savory
Smart brings KCON:TACT especially 4U to subscribers from June 19 to 27
Dizon: 40 of 119 ‘Build’ projects done by 2022
MOST READ
Landmark tale of corruption
Mayor vs mining ‘guilty of oppression’
William Martinez sometimes feels his kids ‘don’t remember’ him anymore
Spread of Delta variant ‘prevented’ –expert
Don't miss out on the latest news and information.