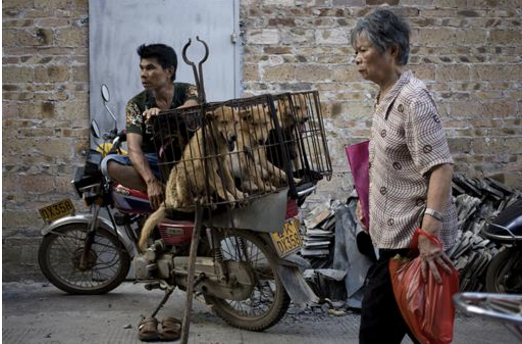 According to a report from the country’s Korea Times, the supreme leader himself has been passing out the advocacy in recent months, describing dog meat dishes as “stamina-boosting” while extolling their “health benefits.”

Among the most commonly eaten breeds are spaniels, labradors and retrievers.To make the pet meat even tastier, mongrels should be killed harshly—including beating, flaying and scorching, the report said.

Cooked dog meat, locally known as “dangogi,” or sweet meat in Korean, is being promoted to the starving North Korean masses for its alleged medicinal benefits for the stomach and intestines.

Meanwhile, some local restaurants, including a reopened dog meat eatery in the capital city of Pyongyang, are currently profiting from “making dog meat more unique.”

“There is no truth to the statement that eating dog meat is healthy, this is a complete fallacy,” she was quoted as saying in the report.

“In fact, far from being a ‘superfood,’ there is evidence spanning decades of the significant human health risk posed by slaughtering and eating dogs, with warnings issued by the World Health Organisation of links between the practice and outbreaks of rabies and cholera in other countries,” the health advocate added.

With famine being a critical issue during the communist dictatorship, the country’s heavily controlled media appear  to have been given the nod to promote canine meat.

In another bizarre twist, using the word hunger has been banned in North Korea, with regime leaders ordering the population to use such terms as the ‘Arduous March’ to make their suffering feel like a patriotic pilgrimage.

Dog meat consumption,  while still considered taboo in Western and other cultures, has continued to be part of the traditional and day-to-day cuisine of many Asian cultures.

However, some parts of Asia have banned the slaughter of dogs for meat consumption—including Singapore, Taiwan, Hong Kong and the Philippines.

Around 25 million dogs are reportedly consumed around the world annually, a 2014 estimate said.  Khristian Ibarrola/rga