Duterte: If I’m lying, you can change me | Inquirer News
Close
menu
search

Duterte: If I’m lying, you can change me 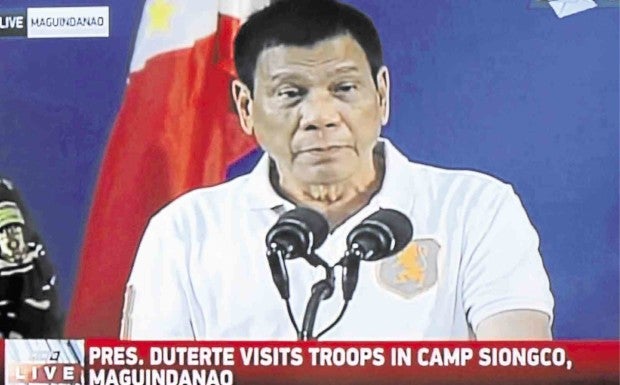 DUTERTE: I won’t talk without any evidence. TV SCREENGRAB

“If you’re a public official, your life is an open book,” President Duterte said on Thursday, a day after he slammed Sen. Leila de Lima for allegedly using drug money for her election campaign in the May elections.

“I won’t talk without any evidence, I’m not like her,” he told reporters in an interview during his visit to Camp Siongco in Awang, Maguindanao province.

The President said he had many witnesses who could pin down De Lima, “including her driver-lover” who, he said, was the senator’s bagman in collecting payoffs from convicted drug lords held at New Bilibid Prison.

Mr. Duterte said he also did not go overboard in criticizing De Lima in his nationally televised speech  at the 115th anniversary of the Philippine National Police on Wednesday.

“I did not, but she did,” he said, adding he was giving the senator a chance to defend herself. “She can have all the time in the world.”

He challenged reporters to “validate” what he had said against the senator and to investigate records in the Department of Justice (DOJ), and the Commission on Human Rights (CHR), which De Lima previously headed.

“You want to know the truth? If I was lying, you can change me,” Mr. Duterte said, adding that while De Lima hated scandal, “she knows she is a public official.”

“She has scandal at the CHR, scandal at DOJ, and she’s talking about family?” he said.

“She accuses the police of doing such things when policemen were getting killed [in antidrug operations],” he said.

As the attack on De Lima drew concern from some quarters, presidential spokesperson Ernesto Abella said on Thursday Mr. Duterte understood the “dynamics and parameters” of public discourse, citing his recent exchange with Chief Justice Maria Lourdes Sereno, whom he railed at and then subsequently apologized to for his harsh words.

But it was apparently a different case with De Lima, who is scheduled to lead next week a Senate inquiry on extrajudicial killings  linked to the war on drugs.

“He has taken umbrage at Senator De Lima’s approach, of not only taking the moral high ground with regard to drug-related deaths, but her assumptions that said deaths are directly attributable to PRRD’s war on drugs,” Abella said, using President Duterte’s initials.

“Apparently, PRRD is appalled by Senator De Lima’s history of jumping to conclusions about the President’s culpability without sufficient evidence, lack of appreciation of the magnitude of the menace, and taking the opportunity to grandstand in spite of the gravity of the situation,” he said.

“In the press conference she called (on Thursday), she did not deny or refute the information. Character assassination predicates the adverse information on the conduct of a person as being false,” Panelo said.

He said the President welcomed any investigation of his drug war and had directed the PNP to conduct its own inquiry into alleged extrajudicial killings.

He added that the President would not tolerate the “salvaging” of any citizen.

He noted the long-running animosity between De Lima and the President that he said had become a “national telenovela.”

Malacañang cited the government’s war on illegal drugs in a documentary released on Thursday to list the administration’s achievements during its first 50 days.

The video showed Interior Secretary Ismael Sueno, saying the President was not a killer, and that his claims saying as much were just intended to underscore his message to the people not to engage in criminality.

Sueno said the government was not involved in extrajudicial killings. “That’s not true. You can read it in the papers, he is also bothered,” he said. With a report from Germelina Lacorte, Inquirer Mindanao

Read Next
Was driver given this white house by senator?
EDITORS' PICK
Beyond the Chocolate Hills: A farm-to-table, heritage culinary adventure of Bohol
MyCitiHomes premiers PH’s first 3-star certified BERDE District residential development
‘Crash Landing on You’ couple confirms pregnancy
Enrile contracts COVID-19: ‘To my critics and enemies, I am not going to die yet’
Metro Manila’s COVID-19 positivity rate jumps from 3.9% to 5.9% — OCTA
House energy committee chair Arroyo bats for cheap electricity
MOST READ
Enrile contracts COVID and snipes at critics, foes: ‘I am not going to die yet’
Duterte: It was correct for Bongbong Marcos to ‘decline’ presidential debates
Russia steps up missile strikes on Ukraine as G7 leaders gather
PH firm partners with US corporation to set up weapons assembly in Bataan
Don't miss out on the latest news and information.