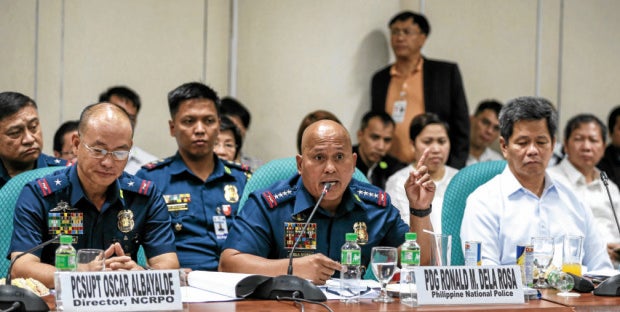 The Philippine National Police chief told Senate investigators on Thursday that only 22 cases had been filed despite the killing of more than 1,500 suspects in President Duterte’s brutal war on drugs.

PNP Director General Ronald “Bato” dela Rosa came under intense questioning during a joint hearing held by six Senate committees that called attention to the apparent unequal treatment of drug suspects in the Duterte administration’s campaign against the narcotics trade.

Under questioning by Sen. Grace Poe, Dela Rosa said 1,564 suspects had been killed as of Aug. 15―899 “deaths under investigation,” including possible vigilante killings and 665 kills in “legitimate police operations.”

But only 22 cases involving killings outside of police operations have been filed, Dela Rosa told the joint hearing called by the committees on public order and dangerous drugs, civil service, health and demography, national defense and security, youth and finance.

Poe pried the information out of the PNP chief as she pointed out the futility of having the police investigate the police over alleged extrajudicial killings in the drug war.

She reiterated her call for a civilian to head the PNP Internal Affairs Service (IAS).

“The ones investigating the police are also the police. My point here is that under the law, a civilian should be the head of the IAS,” Poe said, referring to the PNP Reform and Reorganization Act of 1998.

She earlier filed a resolution seeking to determine why the provision for a civilian head of the IAS had not been enforced.

Poe brushed aside Dela Rosa’s response that a civilian could be “easily threatened.”

“I understand your concern that a civilian might not be able to cope with the police culture, but that’s not what is in the law and I don’t believe that,” Poe said.

In the end, Dela Rosa said the appointment of a civilian IAS head could easily be done. “If you really want that to happen, right away, Ma’am, I can appoint a new IAS chief,” he said.

During the hearing, Sen. Leila de Lima gave a preview of the inquiry that her committee on justice and human rights would open on Monday into the spate of killings of suspects in Mr. Duterte’s drug war.

She asked Dela Rosa if it was the administration’s impression that the government under former President Benigno Aquino III allowed drugs to proliferate.

Dela Rosa replied: “I cannot say that the past administration did nothing, but this I can tell you frankly. With all honesty, this happened because the police failed to do their job.”

He cited the involvement of policemen in the narcotics trade, as Mr. Duterte himself had disclosed.

De Lima then asked him whether the new PNP leadership bothered to ask law enforcement agencies for accomplishment reports on the campaign against drugs of the previous administration.

Dela Rosa answered: “Honestly, I did not, because that’s already in the past. My concern now is the problem we are facing now. I never get to sleep enough anymore because of this drug problem.”

De Lima went on to make clear that the Aquino administration did not neglect the drug problem. “It just was not the thrust of the previous administration, but it can’t be said that it did nothing,” she said.

Then she asked Dela Rosa whether a violent campaign was the solution to the problem, informing the PNP chief that that would be the topic of discussion during her committee’s hearing on Monday, and asking him whether he would show up.

“I would be very happy to face you, your honor,” Dela Rosa replied.

Sen. Gregorio Honasan called on the PNP, Philippine Drug Enforcement Agency and  Dangerous Drugs Board to work closely together, citing intelligence that the proliferation of drugs in the Philippines was a “state-sponsored” effort by another country.

He was clearly referring to China, which, as Dela Rosa confirmed later in a press briefing, was the source of much of the illegal drugs and drug-making materials found in the Philippines.

“Almost all are coming from there, whether finished products or raw materials,” Dela Rosa told reporters, adding that some contraband from mainland China is usually shipped to the Philippines through Hong Kong or Taiwan.

The PNP said most drug lords arrested or identified in the Philippines were Chinese. He also said the possible involvement of Chinese hit men in vigilante killings of suspects ordered by drug kingpins was under investigation.

President Duterte earlier said he would ask the Chinese government why its citizens were involved in the illegal drug trade in the Philippines.

In an interview after the hearing, Sen. Richard Gordon proposed that the government send a note verbale to China to “censure formally and tell their people not to bring drugs to other countries.”